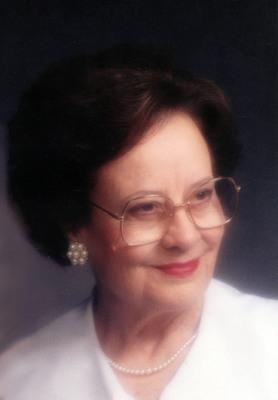 Monroe - Verna Lee Stover Angel was born March 2, 1925 in England, Arkansas and she died in Monroe, Louisiana on March 3, 2019 at the age of 94. A memorial service will be held on March 23, 2019, at 11 a.m. at Westminster Presbyterian Church in Hot Springs, Arkansas where she will also be interred in the columbarium.

She was born in England, Arkansas and was raised in Hot Springs, Arkansas. Like both of her parents, Lee learned to fly. On completion of her first solo flight, her father had his mechanic remove the wooden propeller as a symbol of the event. It is still displayed today. Graduating from Hot Springs High, she attended Texas Women's College in Denton, TX. After college, Lee obtained her commercial pilot's license and worked for her father, John Stover, at Stover Aviation in all aspects of business. In those days, her nickname was Smokey. She met her future husband, Paul, when he came to Hot Springs to work as both mechanic and pilot for her father. Both would go on to work for Chicago and Southern (which merged into Delta Airlines), Lee as a ticket agent and Paul as a pilot. Through the years they lived in Memphis, Houston, New Orleans, Dallas, and Atlanta before retiring back to Hot Springs.

Lee was very proud to be part of a flying legacy. The four generations include her mother, father, husband, son, daughter, grandson, and granddaughter.

She went on to be a consummate hostess, entertaining family and friends wherever she lived. Lee loved serving others, especially her grandchildren. Although they traveled the world, Lee and Paul were happiest upon returning to their home, Mosswood, on Lake Hamilton.

She was preceded in death by her husband, Paul Angel; and her parents, John Stover and Emily Mae Stover Offenstein.

The family would like to extend warm thanks to all of the wonderful employees at The Oaks' Eden Place and Ascend Hospice.

In lieu of flowers, the family requests memorials are made to the Alzheimer's Association or P.E.O. Educational Loan Fund, https://donations.peointernational.org/ Specify Chapter BJ in Arkansas.


To plant trees in memory, please visit our Sympathy Store.
Published by The News Star on Mar. 10, 2019.
MEMORIAL EVENTS
Mar
23
Memorial service
11:00a.m.
Westminster Presbyterian Church
, Hot Springs, LA
MAKE A DONATION
Please consider a donation as requested by the family.
MEMORIES & CONDOLENCES
19 Entries
May the God of all comfort strengthen the family during this time of deep sorrow. Those who pass on, God keeps in his memory because they are precious in his eyes. My sincerest condolences. (Psalms 116:15)
Lisa D
March 16, 2019
May your hearts soon be filled with wonderful memories of joyful times together as you celebrate a life well lived.
SueAnn
March 14, 2019
May the God of comfort be with you at this most needed occasion. We weep with those who weep as Romans 12:15 states. God gives us the strength to comfort others in their time of need.

Darlene
March 12, 2019
Lee was one of the nicest people I have ever had the honor of knowing. She and I grew close when I was her housekeeper then later, her caregiver at West Shores in Hot Springs. She became one of my best friends and I loved her like she was my second mother. I have thought about her often and am sad I didn't get to see her after she moved to Monroe. My heart hurts. But I am comforted knowing she is with her precious Paul, whom she spoke of every day.
Kary Sullivan
March 12, 2019
Sending prayers during this time of loss. What a wonderful life to celebrate. We will continue to treasure all memories of Aunt Verna Lee and our families blessed times we shared.
Amber (Holzer) McDonald
March 10, 2019
To the Angel Family, you my have my sympathy and condolences for your loss. It hurts a lot to lose a loved one! You have Gods promise to look forward to seeing her again one day. Hosea 13:15.
J R
March 6, 2019
My deepest condolences to the family for your loss. Psalms 90:10 says that the days of our years are 70 years, And of because of special mightiness they are 80 years. Very special indeed!*
March 6, 2019
To the family and friends of Verna Lee Stover Angel my Condolences.
March 6, 2019
My heartfelt condolences for your loss. May the love and support of family and friends carry you through your grief, as you await the fulfillment of Gods promise to one day be reunited with your loved one again (John 6:40)
March 6, 2019
My heartfelt condolences for your loss. May the God who comforts all who mourn help to sustain you during this most difficult time, as you await the fulfillment of Gods promise to one day be reunited with your loved one again (John 6:40)
March 6, 2019
May you all have the strength you need at this time of sorrow, Phillipians 4:13.- Philadelphia.
March 6, 2019
I am so sorry for your loss, please accept my sincere condolences. May God bring everlasting comfort to your hearts and give you the strength to endure this difficult time.
(2 Thessalonians 2:16,17
March 6, 2019
My condolences to the family . May you find comfort in your treasured memories and Gods promise to return your loved ones who passed away in death . 1 Thessalonians 4 : 13 , 14
Earnie Ray
March 6, 2019
In loving memory of a wonderful person. We will love you and miss you always.
G B
March 6, 2019
When someone you love becomes a memory, the memory becomes a treasure. May the wonderful treasures fill your hearts with love and bring you peace. Our thoughts and prayers are with you during this difficult time. Hosea 13:14
March 6, 2019
At this time of grief may you cherish your memories and find comfort in the God of all comfort.
March 6, 2019
Please accept my dearest and heartfelt sympathy; I am so sorry for your loss. May the God who "binds up the brokenhearted" and "comforts all who mourn" sustain your family during this difficult time. Isaiah 61:1,2
RK
March 6, 2019
Please accept condolences for the loss of your loved one,may the words from Psalms 94:18,19 bring the family and friends comfort.
March 6, 2019
Grief can be so hard, but our special memories help us cope. Remembering our Heavenly Father will be there to provide comfort and support that you need during this difficult time. Our heartfelt condolences.
March 6, 2019
Showing 1 - 19 of 19 results