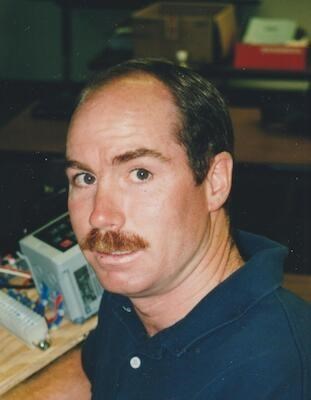 Fond du Lac - After enduring months of severe pain that rendered him unable to enjoy life, Tony found relief and peace on June 11, 2021 when he left this earth. Tony was born in Oshkosh, Wisconsin on May 24, 1962, the first son of Wayne and Janice (Cholewinski) Reese. Tony graduated from Oshkosh West in 1980 and then earned a degree in Electrical Engineering at the University of Memphis. Tony later returned to Oshkosh, working at Oshkosh Truck while earning a master's degree in Mathematics at UWO. He then began teaching at Moraine Park, where he just completed his 27th year. Tony was born to teach, any subject, any skill—he could learn it and then teach it. He had a true love of passing on his knowledge. Tony also spent many years working with his former students at Kingsbury, Inc.

Tony's son, Kevin Lee, was born in Oshkosh in 1985. Tony derived great joy from teaching him, and they shared many adventures together. Tony was always happy to lead trips to Kolf Sports Center, the Wolf River, or the Red Granite Quarry.

On June 23, 2001, Tony married his best friend, Patti (Cahill) Longdin, in a beautiful ceremony at Lakeside Park, and Patti's daughters gained the best "Faux Pa" they could ever imagine. At the end of his life, Tony wrote that he had "loved every minute of their life together and wished that they could do it all over again." They enjoyed escaping winter with their adopted family in Jamaica where he rode his motorcycle all over the island, buying treats for the children that flocked to him. Summers were made for long rides with his beloved dog Tedd on the back of his bike.

Tony was an avid golfer, who especially enjoyed figuring out the mechanics of the golf swing. Making the lawns of "the village" in Oshkosh look beautiful, snowplowing around the entire block, creating new teaching materials, and taking care of his family—no matter what Tony did, he gave it 150 percent.

Tony is survived by his loving wife Patti who will miss him every day for the rest of her life, the two stepdaughters that he adored, Katie (Kevin) Wilke and Amanda (Tyler Gau) McCormick, as well as his son Kevin and his family of Appleton. His special granddaughter Kinsleigh Anne will always miss her beloved Grumpo. He is further survived by his father Wayne of Oshkosh, his brothers Jim and Bob (Stacey) of Oshkosh and Rich (Tracy) of Menomonee Falls. Tony's nieces and nephews are left with memories of fun with an uncle who was usually the biggest kid in the room. Jacob Cahill was a special nephew whom Tony considered to be his second boy. He was preceded in death by his mother Janice in 2014.

In lieu of flowers, a memorial will be established to benefit students at Moraine Park.

Additional information and guestbook can be found at ueckerwitt.com


To plant trees in memory, please visit our Sympathy Store.
Published by Oshkosh Northwestern from Jun. 14 to Jun. 16, 2021.
MEMORIAL EVENTS
Jun
17
Visitation
3:00p.m. - 6:00p.m.
Uecker-Witt Funeral Home
524 North Park Avenue, Fond du Lac, WI
Jun
17
Celebration of Life
6:00p.m.
Uecker-Witt Funeral Home
524 North Park Avenue, Fond du Lac, WI
Funeral services provided by:
Uecker-Witt Funeral Home
MAKE A DONATION
MEMORIES & CONDOLENCES
Sponsored by Uecker-Witt Funeral Home.
3 Entries
We are truly saddened by loss of our neighbor, friend, and teacher. I am so grateful for everything he has done for us. He never hesitated to help when he could. I mentioned once to Tony how my daughter was struggling with Algebra and he recorded very detailed lessons for her to watch online. Thanks to him my daughter passed algebra and learned some skills to be successful through high school and college. She needed help and he taught her more than what an entire semester of online school taught her. He has done so much for us and others in the neighborhood throughout the years, helping with our yard, winter shoveling for everyone, and always teaching us new things. I wanted so badly to somehow repay him for helping us through the years, but he didn’t not want anything to do with that, he would always stop me and say, “that’s what neighbors do”.
I wish now I could have somehow let him know how important he was to our lives. I have always been grateful to have my kids grew up next door to Tony and Patti. Together they taught my family so much about how to be a good neighbor through selfless acts of kindness. We feel we took for granted that he was always there, maybe it was a small part or our day but we are going to miss the quick friendly wave, how he always made my daughter smile whenever he would take Teddy out for a cruise, and just seeing Tony and Patti together was always a good reminder of how lucky we were to have been right next door to this wonderful couple. We will be holding Patti close in or thoughts and hope she can find peace and comfort in all of the good memories they have shared.

Donnell Creighton
Neighbor
June 16, 2021
We sure are going to miss you and we will make you proud of the beautiful lawns in The Village.
The Village family
Served In Military Together
June 15, 2021
Offering our deepest condolences during this difficult time.
The Staff of Uecker-Witt Funeral Home
June 15, 2021
Showing 1 - 3 of 3 results