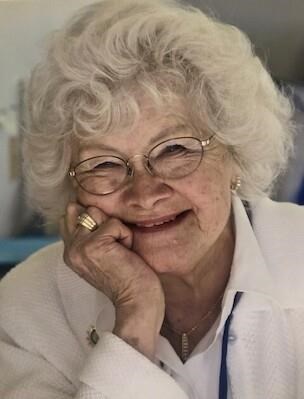 Audrey Louise Poberezny passed away November 1 at Evergreen Assisted Living in Oshkosh, Wisconsin. She was 95. Audrey was born January 24, 1925, in Milwaukee, WI, to parents Thomas and Lillian Ruesch, both deceased. She attended West Milwaukee High School and was often voted "best dressed girl in school." There she also met young Paul Poberezny, who was never considered for anyone's best dressed list, yet in 1944 became her husband for the next 69 years.

Audrey is known to many in aviation as the "first lady" of the Experimental Aircraft Association (EAA), the aviation organization she and her husband founded in 1953 while he was serving in the Wisconsin Air Guard. Because Paul was gone so much, it was up to Audrey to provide the continuity to keep the organization going during those early years. Paul often said, "Without Audrey, none of this would have happened." Audrey never sought a public role while building what quickly became a worldwide organization, choosing instead to work diligently behind the scenes to ensure things stayed on track. Her consistent leadership, strong administration and people skills, led EAA through the first formative decades. You always knew exactly what Audrey had in mind. There was no gray area, no vacillating. She never lost focus. In the early years, she also worked along side of the volunteers, helping clear the site for the first EAA fly-in convention, beginning more than a half-century of Oshkosh conventions. Later on, she greeted guests from around the world, ensuring they had a most memorable experience. She was always there, fingers on the pulse, always ready to steer the ship. Although not a licensed pilot, Audrey knew her way around airplanes - both inside and out. Displaying a fearless streak, she became the family's first - and only - wing walker. She was also an extremely skilled seamstress. Paul took advantage of this and put her to work stitching fabric for his many aircraft projects. She also enjoyed crocheting items for a local hospital. When great granddaughter Charley arrived, Audrey headlined four generations of Poberezny family females, another highlight in a life full of highlights. She once hinted it was her favorite.

At this time, only a private family service is scheduled. In lieu of flowers, memorials in honor of Audrey's life and legacy can be made to the Evergreen Foundation, 1130 North Westfield Street, Oshkosh, WI 54902.

Published by Oshkosh Northwestern from Nov. 2 to Nov. 8, 2020.
To plant trees in memory, please visit the Sympathy Store.
MEMORIAL EVENTS
To offer your sympathy during this difficult time, you can now have memorial trees planted in a National Forest in memory of your loved one.
Funeral services provided by:
Fiss and Bills Poklasny Funeral Home
MAKE A DONATION
MEMORIES & CONDOLENCES
Sponsored by Fiss and Bills Poklasny Funeral Home.
2 Entries
An unbelievably wonderful lady who deserves much more credit than she has ever received for all that she was responsible for over the decades of growth of the EAA. My sympathies, personal condolences and thoughts to the entire family.
Dick Koenig
Friend
November 5, 2020
What a wonderful lady she was! Got to meet her a few times over the years that my husband worked for EAA. She and Paul were quite the team! My condolences to the full Poberezny family upon Audrey's passing. Rest well sweet lady!
Kathi Spangler
Acquaintance
November 3, 2020
Showing 1 - 2 of 2 results