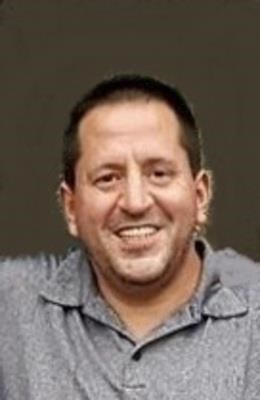 Oshkosh - Benito "Ben" G. Alvarado Jr., age 53, of Oshkosh, WI, has moved on to meet his creator. His spirit peacefully departed from this world on Sunday, April 1, 2018, at Manorcare of Appleton.

Ben was born in Berlin, WI to Benito Ibarra Sr. and Barbara Mae (nèe Grant) Alvarado on March 3, 1965. He cruised around for most of his life in Oshkosh, WI, where he attended Oshkosh West High School. Shortly after, Ben moved to Ripon, WI where he started his family.

Ben considered himself to be a hardworking man. Others saw him as a great craftsman and woodworker. Ben had an amazing ability to make people laugh and always seemed to have something to say; even if it was wildly inappropriate. Ben was known for his entertaining stories, which he liked to repeat…often.

Ben passed away loving the outdoors and believing Wisconsin hunting was great in the fall, fishing was great whenever you could find a good spot, and cookouts were best in the summer. Ben left this world as a pool shark and champion air guitar and steering-wheel-drummer. He believed classic rock would live on forever and had enough concert stubs to prove this to be fact.

Although his life was relatively short, Ben did not live an average life. He learned what he wanted, did what he wished, and spent time with those he loved most. Family and friends witnessed that some of his happiest moments were experienced while he was living in recovery. It was during these times where he was often seen smiling and laughing alongside his two grandchildren.

Ben was preceded in death by his parents, Benito and Barbara; grandparents James and Martha; Aunt Lucille; brothers Sherman and Michael; niece Alana; and nephews John and Kevin. His sister, Sylvia, passed away a few weeks earlier on March 13, 2018.

Ben is survived by his sons Anthony, Cory, and Bryce Alvarado; his wonderful grandchildren Gavyn and Jaedah Alvarado; and brothers Harold Grant and Randolf "Randy" Alvarado; along with many aunts, uncles, cousins, nieces and nephews.

Anyone who knew Ben is asked to celebrate Ben's life in their own way. He will truly be missed and forever remembered.

In lieu of flowers, donations for his memorial may be made Payable to: Community Church New City, d, 100 City Center, Oshkosh, WI 54901. Online condolences may be left in Benito's online guestbook at www.konrad-behlman.com.

The family would like to extend their heartfelt gratitude to Heartland Hospice, Manorcare, Oshkosh Family, and Lakeland Care District. Your service for Benito and support for the family will always be greatly appreciated. Thank you Konrad-Behlman Funeral Homes for your services as well.

Published by Oshkosh Northwestern on Apr. 15, 2018.
To plant trees in memory, please visit our Sympathy Store.
MEMORIAL EVENTS
Apr
21
Visitation
11:00a.m.
New City Community Church
d, 100 City Center, Oshkosh, WI
Apr
21
Service
11:30a.m. - 12:30p.m.
New City Community Church
d, 100 City Center, Oshkosh, WI
Funeral services provided by:
Konrad-Behlman Funeral Homes - Westside
MAKE A DONATION
MEMORIES & CONDOLENCES
Sponsored by Konrad-Behlman Funeral Homes - Westside.
4 Entries
One day at time.Help me believe in what I could be and all that I am.Show me the stairway I have to climb.
Lord, for my sake:teach me to take one day at time.
Orla Laferty
April 23, 2018
Ron Paulsen
April 23, 2018
Ben was a great man I spent a lot of time while I was at Northpoint in Oshkosh. When I would walk down to his room he was a great guy to talk to I will always remember the time we spent together Rest in Peace Ben.
Ron Paulsen
April 23, 2018
May you find peace knowing he is now in a better place. No more struggles, pain or suffering. God bless the entire family.
Val Scheuers
April 15, 2018
Showing 1 - 4 of 4 results