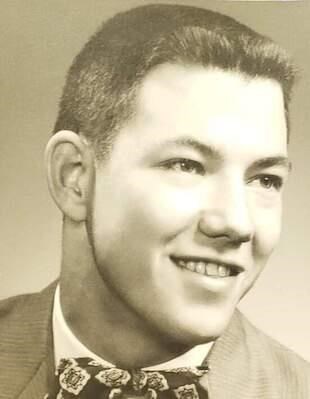 Neenah/Oshkosh - Bernard "Bernie" Wapp, age 87 of Neenah, passed away on Thursday, July 22, 2021 at Evergreen Retirement Community-Sharehaven Home, in Oshkosh. Bernie was born May 24, 1934 in the town of Sheboygan Falls, WI, son of Joseph and Erna (Federwisch) Wapp.

Bernie and his twin sister, Barbara, were orphaned at the age of two. They were raised by their grandparents, John and Augusta Wapp of Plymouth, WI until they were 10 years old. Their Aunt and Uncle, Roy and Angela Harnack of Kiel, WI, raised them until adulthood.

As a student at Keil High School, Bernie had a successful sports career. He was one of two football players that played for five years, having gone out for the team in eighth grade. Bernie always had a great sense of humor and a joke for everyone. Bernie served his country for four years in the U.S. Navy. In 1962 he married Joan Worel, of Manitowoc, who was his wife until 1992.

Bernie was a graduate of UW-Oshkosh with a Bachelor's and a Master's Degree in Art Education. He was a teacher with the Oshkosh schools for 30 years and his pastime for 45 years was refinishing furniture and seat weaving. He will be missed by his relatives and many friends, who meant a great deal to him.

Bernie was preceded in death by his parents; grandparents: John and Augusta Wapp of Plymouth, WI; and Richard and Emma Federwisch of Sheboygan Falls; by his foster parents, Roy and Angela Harnack, and by his brother, Richard Kapp.

He is survived by his daughter, Amy (Raymond) Whiten; his grandson, Reginald; by his "little brother," Mike (Patricia) Angell; as well as by numerous nieces and nephews. He is further survived by his sister, Barbara (Chester) Socia; and by Nola Richards.

A memorial service for Bernie will be held at a later date.


Published by Oshkosh Northwestern from Jul. 23 to Jul. 25, 2021.
To plant trees in memory, please visit the Sympathy Store.
MEMORIAL EVENTS
To offer your sympathy during this difficult time, you can now have memorial trees planted in a National Forest in memory of your loved one.
Funeral services provided by:
Westgor Funeral Home - Neenah
MAKE A DONATION
MEMORIES & CONDOLENCES
Sponsored by Westgor Funeral Home - Neenah.
8 Entries
So sorry for your loss. Always enjoyed seeing Bernie and reminiscing about our days at Kiel High.
ELisabeth Thiel
Classmate
July 30, 2021
It's been many years since I last talked to Bernie but his virtues were obvious then and his obit bears it out. Much respect!

Bill Ney l
Bill Ney
Acquaintance
July 29, 2021
Rest in PEACE Bernie. Thank you for your friendship from our days at family camp. Always enjoyed your VW stops on our walks. Gos Bless you and your family.

Mike/Sandy Smith
Friend
July 26, 2021
In the 60's and 70's, we lived next door to Bernie. He was always willing to lend a hand. He was my daughter's baptismal sponsor also. A nice guy. Rest in peace, Bernie. You deserve it.
Sue Erdmann
Friend
July 26, 2021
Mr. Wapp was my neighbor while I grew up. He was a very kind and friendly man. I'll always remember him cruising around town in the summers driving his white Volkswagen Beetle #53. Rest in peace.
Jenn Leisner
July 26, 2021
Mr. Wapp was a beautiful human and I was lucky to have him as a teacher. He also weaved a chair for my mother which she still has and will always remind me of his kind and creative spirit. Love to him and his family.
Amy Pouba
Student
July 24, 2021
Bernie was a kind and gentle man. He often stopped at our home in Neenah to visit and share a humorous story. Our sympathy to Amy and family.
Gordon and Sue Rule
July 23, 2021
My condolences on the passing of Bernie...a great football player for Kiel High School...and happy to call him my teammate. He attended our class reunions and it was always great to see him and his smile. We'll miss him, but still are able to see Barbie. Most sincerely, Floyd R. Henschel, KHS, Class of 1952
Floyd R. Henschel
Friend
July 23, 2021
Showing 1 - 8 of 8 results