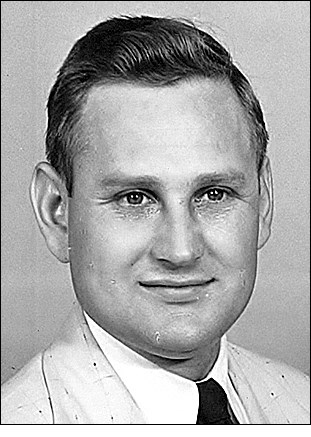 FUNERAL HOME
SPARKS GRIFFIN FUNERAL HOME (LAKE ORION)
111 East Flint Street
Lake Orion, MI
Harper, Robert L.; 93; of Rochester Hills; passed away Sunday, June 15, 2014 following a brief illness. Robert (Uncle Bob) led a full and eventful life. A true W.W.II hero, he was a Navy flier whose bomber was shot down in the midst of a Japanese task force. A Pontiac Daily Press front page article dated Monday, April 30, 1945 recalled Ensign Harper piloting a patrol Bomber, the “No Name Yet” being shot down while on a night flight. The plane crashed into the sea in the middle of the Japanese fleet. Remarkably, only one man was injured and the crew washed up on an island 2 days later. Robert survived a 27 day odyssey among Philippine islanders before being rescued by the Navy. He was presented with several honors and served our country well. Upon returning home he continued his education and earned a M.A. and an Education Specialist in 1970 from Michigan State University. He retired from Waterford School District in 1983 after 25 years. His last responsibility was as a Distributive Education Co-Op teacher in high school but he also taught several years at the elementary and junior high levels. Robert is survived by nieces and nephews, Robin Harper (Pat) Bobek, David M. Harper, Scott T. Harper, Don (Karen) Harper, Daniel (Janet) Harper, Diane (Steve) Griggs, Chris Harper, Niki Harper, Roberta (Bill) Bonkoski; sister-in-law, Isabel Harper; and many great nieces and nephews. He also had many wonderful friends including Robert Gaylor and Sally Bolle; and honorary granddaughters, Meghan Wilcox and Molly Guzman. Preceded in death by beloved niece and nephews, Karen L. Harper, Dominique (Joan) Fortino and Anthony Harper; brothers, Carroll and Donald Harper; and sister, Nora Cooper. Memorial Services will be held on Tuesday, June 24, 2014 at 12:30 p.m. at Great Lakes National Cemetery, 4200 Belford Rd., Holly, MI 48442. A Luncheon hosted by Sally Bolle will immediately follow. Funeral arrangements have been entrusted to SPARKS-GRIFFIN FUNERAL HOME, Lake Orion. In lieu of flowers, please make donations to the American Cancer Society (800-227-2345) with acknowledgements to Sparks-Griffin Funeral Home, Lake Orion. Reflections may be shared with the family by visiting www.sparksgriffin.com
Published by The Oakland Press from Jun. 20 to Jun. 22, 2014.
To plant trees in memory, please visit the Sympathy Store.
MEMORIAL EVENTS
Jun
24
Memorial service
12:30p.m.
Great Lakes National Cemetery
4200 Belford Rd.,, Holly, , MI
Funeral services provided by:
SPARKS GRIFFIN FUNERAL HOME (LAKE ORION)
MAKE A DONATION
Please consider a donation as requested by the family.
MEMORIES & CONDOLENCES
Sponsored by theoaklandpress.com.
6 Entries
He was my favorite teacher in High School. He came to my house for my graduation party in 1972. What a great guy. Lots of good memories.
Steve Adams
Student
February 25, 2020
We were saddened to hear the news about Robert's passing. He was always such a cheerful and outgoing man. His stories were always fun to hear and he had the sneaky sense of a humor that caught you by surprise. We are grateful to have known him.
Kirk & Rodney Leader-Rusk
June 23, 2014
Had Mr. Harper one year in elementary school. He was a great teacher. RIP. We offer our sincerest condolences and prayers. Ralph and Mary Pardo.
Ralph and Mary Pardo
June 23, 2014
Uncle Bob was AWESOME! We loved him so much and will never forget his stories, intelligence, and love for his family. He will be missed deeply. He was always so good to me and my children! Thanks Uncle Bob.
Cindy Harper
June 22, 2014
Deepest sympathies to the Robert Harper family. Mr. Harper was and will always remain my favorite teacher! He was my teacher in both 7th and 9th grades at Mason Junior High.
Susan Brauer Rowat
June 21, 2014
Condolences to the Robert Harper family. Mr. Harper was my fifth grade teacher at William Austin Burt School in Waterford Michigan during 1962-63 school year.
June 21, 2014
Showing 1 - 6 of 6 results