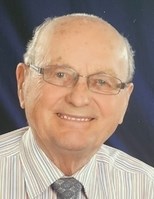 FUNERAL HOME
Elton Black & Son Funeral Home
3295 East Highland Road
Highland, MI
Ronald Clare Voorheis of White Lake, passed away June 2, 2021 at 91 years of age. Ron was the beloved husband of Mary Louise Walquist Voorheis for 59 years. They met in 1960 and Ron always showed his love and affection for Mary until the end. He was the loving father of Valerie Voorheis of Sunderland, Massachusetts (husband Doug Fulton), Leslie Ashbaugh of Portage, Michigan (husband Bob Ashbaugh) and Andrea Voorheis of White Lake (husband Bob Szolach); proud grandfather of Tyler and Adam Ashbaugh, and Annika and Eliza Voorheis. He was treasured brother to Calvin Voorheis, (and brother-in-law of Karen Voorheis), brother-in-law to Ronald Randall (the sister of the late Marilyn Randall) and brother-in-law to Kathy Voorheis (and brother to the late Roger Voorheis.) After graduating from Holly High School in 1948, he worked with his parents Clare Gilbert and Myrtle Mae Welberry Voorheis on their Centennial Farm in White Lake until his Uncle Hazen Welberry (and White Lake Township Clerk) encouraged him to run for Treasurer, then a part-time position in White Lake with its' 1950 population of 4182 people. He was elected to be the White Lake Township treasurer in 1956 and was re-elected 12 times. He then ran for and won election as Trustee for two terms, eventually retiring from elected office in 2004. The population of White Lake was then 28,220. White Lake grew by 85% under his dutiful leadership. He was the President of the Michigan Township Association in 1977, and always an active member of the Historical Society since its' inception in 1987. He was on the Huron Valley Community Chest Committee. Ronald was a lifetime member of White Lake Presbyterian Church, as were his parents, grandparents and even great-grandparents. There he served as a Deacon, Elder and Sunday School Superintendent, and was active his whole life. Sunday was always his favorite day, and he enjoyed singing loudly (although not everyone else necessarily appreciated his musicality.) He will probably be most remembered by many for his portrayal of Uncle Sam in various parades in Milford, Clarkston, and Union Lake from the early 1970's. He first road a "bumpity" bike and then a high wheeler, always taking time after parades to give rides to excited children. There were a few years where he got all his daughters and the occasional niece or nephew to dress up in matching costumes and ride with him, adding tandem bicycles to the mix (the unicycle experiment was unfortunately a failure.) But for most of the years he rode with Mary as his Mrs. Uncle Sam. While he eventually had to give up the bikes, he rode as Uncle Sam on other gas-powered vehicles until a few years ago. Ron met his wife Mary while 4-H leaders in Oakland and Macomb County, respectively. Together they led White Lake 4-H Club until the 1980's, influencing hundreds of young people, including their three daughters. In addition to being a fabulous husband, father, father-in-law, grandfather, uncle and cousin he found time to volunteer for Meals-on-Wheels, and was a multi-gallon blood donor for the Red Cross. He was also an excellent vegetable gardener. Funeral services will be held at 11 a.m. on Tuesday, June 8, 2021 at the White Lake Presbyterian Church, 4805 Highland Road in White Lake. The family will receive friends on both Sunday, June 6, 2021 and Monday, June 7, 2021 from 3-7 p.m. at the Highland Chapel of the Elton Black & Son Funeral Home, 3295 E. Highland Road in Highland and Tuesday at church from 10 a.m. until the time of the service at 11 a.m. Burial will take place at the White Lake Township Cemetery. Memorial contributions suggested to White Lake Presbyterian Church or the White Lake Historical Society. www.eltonblackandsonhighland.com
To plant trees in memory, please visit our Sympathy Store.
Published by The Oakland Press on Jun. 6, 2021.
MEMORIAL EVENTS
Jun
6
Visitation
3:00p.m. - 7:00p.m.
Elton Black & Son Funeral Home
3295 East Highland Road, Highland, MI
Jun
7
Visitation
3:00p.m. - 7:00p.m.
Elton Black & Son Funeral Home
3295 East Highland Road, Highland, MI
Jun
8
Visitation
10:00a.m. - 11:00a.m.
White Lake Presbyterian Church
4805 Highland Road, White Lake, MI
Jun
8
Funeral service
11:00a.m.
White Lake Presbyterian Church
4805 Highland Road, White Lake, MI
Funeral services provided by:
Elton Black & Son Funeral Home
MAKE A DONATION
MEMORIES & CONDOLENCES
Sponsored by theoaklandpress.com.
1 Entry
Ron will be missed in our neighborhood. Ron and Mary always had something nice to say to us and always asked about our daughters Jennifer and Danielle. Your family will be in our prayers.
Tony and Sharon Kovach
Tony and Sharon Kovach
Neighbor
June 10, 2021
Showing 1 - 1 of 1 results