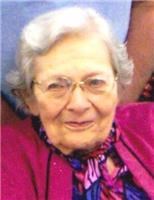 BORN
1922
DIED
2016
FUNERAL HOME
Grove-Bowersox Funeral Home, Inc.
50 South Broad Street
Waynesboro, PA
Mrs. Elizabeth J. (Parker) Hammond, 93, of Quincy Village, Waynesboro, PA, died peacefully on Friday, May, 20, 2016 in the nursing home.
Born November 5, 1922 in Norfolk, VA, she was the daughter of the late Claiborne and Nellie Parker.
She graduated with her Master's Degree in Health Records from the University of Maryland in 1977.
She and her husband, the late Mr. David Hammond, were married June 10, 1978 in Olney, MD. They moved to Quincy Village 20 years ago. Mr. Hammond died August 22, 2006.
Mrs. Hammond worked for George Washington University as a record-keeper for many years until her retirement.
She was a member of Quincy United Methodist Church. Mrs. Hammond was very active at Quincy Village; she played the piano for services held there. She was also an avid reader and a Baltimore Orioles fan.
She is survived by one son; Chuck Boettner and his wife Karen of Frederick, MD, three grandchildren; Ryan Boettner and his wife Kristy, Kyle Bottner and his companion, Cory Neff and Carl Boettner all of Frederick; three great-grandchildren; one sister, Julia Pace of Norfolk, VA.
In addition to her parents and husband she is preceded in death by her first husband Charles Boettner.
A memorial service will be held in the Bryson Room at Quincy Village, 6596 Orphanage Road, Waynesboro, PA. The service date and time will be announced at a later date.
In lieu of flowers, memorial contributions may be made to: Quincy Village Benevolent Care Fund, 6596 Orphanage Road, Waynesboro, PA 17268 or Quincy United Methodist Church, P.O. Box 218, Quincy, PA 17247.
Grove-Bowersox Funeral Home, Waynesboro, is handling the arrangements.
Online condolences may be expressed at www.bowersoxfuneralhomes.com

Published by The RecordHerald on May 23, 2016.
To plant trees in memory, please visit the Sympathy Store.
MEMORIAL EVENTS
To offer your sympathy during this difficult time, you can now have memorial trees planted in a National Forest in memory of your loved one.
Funeral services provided by:
Grove-Bowersox Funeral Home, Inc.
MAKE A DONATION
MEMORIES & CONDOLENCES
Sponsored by Grove-Bowersox Funeral Home, Inc..
0 Entries
Be the first to post a memory or condolences.