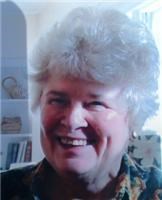 Lynda Lou Elizabeth Richards, 71, of Rolla, MO died peacefully attended by family on March 28 in Columbia, MO from complications of long standing respiratory illnesses. She was a brilliant scientist and a life long student of the natural world who loved to share her knowledge with others.
From humble childhood beginnings in her "nature corner" in the basement of the Richards family home in Ames, Iowa, she attained a PhD in Entomology from Washington State University in 1972. Her professional career included positions at the Live Insect Zoo at the Smithsonian Institute in Washington, DC and the Missouri Department of Natural Resources. She retired in 1997 after 21 years of service having attained the position of Chief Ecologist of the Mark Twain National Forest in Southern MO. She maintained through it all that she "just liked to look at bugs".
She was an accomplished musician and artist having been encouraged in these interests by her parents and others. In her youth she played viola in the Iowa All State Orchestra, and in later years she played with the Rolla Symphony. With friends, she traveled nationally to attend opera performances, with a special appreciation for Wagner.
In 1997 she married professional colleague, John Grinstead with whom she shared a great love for Missouri's natural environment.
Her insect drawings were published in professional literature. Her scientific papers have been donated to the Parks Library 'Women in Science' archives at Iowa State University where she earned B.S. and M.S. degrees.
Lynda loved the outdoors and was active in many local and national nature preservation and appreciation activities. She was an active member of many organizations: Ozark Rivers Audubon Society, Master Gardeners, Master Naturalists, Missouri Native Plant Society, Missouri Prairie Foundation, Missouri Mycological Society, The Nature Conservancy, Missouri Botanical Gardens, and Citizens To Save Bueler Park. She led wildflower walks for many groups of adults and children.
She was an active member of the Unitarian Universalist Church.
Lynda was preceded in death by infant brother John W. Richards, her
parents Myrlin J. and Mary V. Richards, husband John Grinstead and nephew David L. Begg. She is survived by sisters Mary Anne (Gary) Begg, Gloria Jean Richards, Dorothy Janet (Rodney) Richards-Tidrick and brother Thomas
James(Nancy) Richards. Also surviving are nephew Josh Tidrick and nieces Michelle Owen, Jamie Richards, Charlotte Richards, and Lydia Richards.
A Memorial Service and Celebration of Lynda's life will be at LaneSprings near Rolla on May 30 at 10:30 a.m. followed by a potluck. All of Lynda's friends are invited.
Memorials gifts may be directed to: newburgchildrensmuseum.org, or to ozarkriversaudubon, ctf4kids.org/how-you-can-help/make-a-donation, or to gracerolla.org/general-information/
Published by The Rolla Daily News from May 20 to May 21, 2015.
To plant trees in memory, please visit the Sympathy Store.
MEMORIAL EVENTS
May
30
Memorial service
10:30a.m.
LaneSprings
near Rolla, MO
MAKE A DONATION
MEMORIES & CONDOLENCES
1 Entry
I will miss Lynds's beautiful smile, her amazing intellect, her sense of humor and her steadfast friendship. RIP my dear friend, you earned it girl!
May 21, 2015
Showing 1 - 1 of 1 results