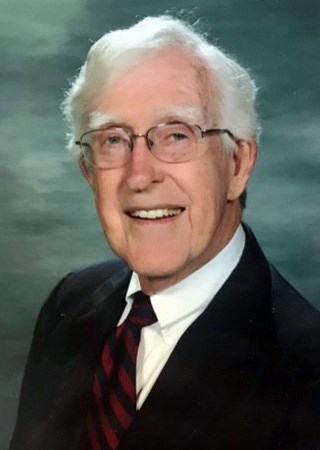 Bruce Ryan Swinburne passed away peacefully on May 22, 2021. He was born at home in Delhi, Iowa, on Children's Day, June 12, 1932, while his two older brothers sat on the porch steps waiting to go to Sunday School! He graduated from Delhi High School and Northern Iowa University, formerly Iowa State Teachers College. He attended Marine Corps Advanced Infantry Training in Paris Island and Quantico and was commissioned 2nd Lieutenant. He served two years active duty in California, Japan, and Hawaii as a 1st Lt. He married his childhood sweetheart, Mary Lou Gaddie, on May 29, 1954.

His first teaching and coaching position was in Humboldt, Iowa. Two wonderful children, Kraig Allen and Wendy Lou were born in 1956 and 1957. He served as a guidance counselor in Gilmore City, Iowa. Summers were spent in Greeley, Colorado, where he received his Master's Degree. In 1962, Bruce became dean of Estherville Jr. College and restored the college to a viable and growing institution. In 1966, Bruce became the founding dean of Glen Oaks Community College in Michigan. The family moved to Bloomington, Indiana, where Bruce earned his doctorate at Indiana University. He was recognized as the top student in his class in the Department of Higher Education. He accepted a position as assistant professor of higher education at Southern Illinois University. He served as vice president of student affairs for fifteen years while still teaching and chairing doctoral student committees as a full professor. One of his greatest joys was interacting with students and attending many of their events. He was known for his friendly demeanor and his famous handshake!

After seventeen years at SIU, he accepted a position as president of Mitchell College in New London, CT. His last position before retirement was starting the doctoral program at U. of Arkansas at Little Rock. He loved teaching and working with doctoral students. Between U. of AR and SIU he chaired about 100 students through their programs and dissertations to achieve their doctoral degrees. Bruce served as an elder in several Presbyterian churches and was a life member of the University of the Ozarks, a Presbyterian University. He and his wife retired to Ponce Inlet, FL in 1998. They enjoyed summers in the Colorado Rockies and traveling the world. He was very proud of having authored three novels. He loved reading, the St. Louis Cardinals, and walking the beach.

He is survived by his loving wife, Mary Lou, of nearly 67 years and his beloved children, Kraig Swinburne and Wendy Bonczyk. He was devoted to his grandchildren, Rachel Marstaller (Josh), Madeline Swinburne, and Nathan Swinburne, as well as many nieces, nephews and their families. He is also survived by his brother-in-law, Thomas Gaddie and his sister-in-law and brother-in-law, Wanda and Harold Reedy.

Published by The Southern Illinoisan on Jun. 15, 2021.
To plant trees in memory, please visit the Sympathy Store.
MEMORIAL EVENTS
To offer your sympathy during this difficult time, you can now have memorial trees planted in a National Forest in memory of your loved one.
MAKE A DONATION
MEMORIES & CONDOLENCES
3 Entries
First, my condolences. I grew up in Carbondale and certainly remember hearing about him. I wish I'd known he spent his later years in Little Rock because I would have touched base with him again. He would have known my parents as my dad was SIU-C faculty. He was a good man and he will be missed.
Carolyn Vieth Boyles
June 16, 2021
Dear Wendy, I'm so sorry to hear of your dad's passing. Growing up, I remember him as quite a commanding presence; his deep voice and towering stature. My condolences to you, Kraig and your mom. Praying for God's comfort and peace as you grieve. Sincerely, Tracy Justice Evans
Tracy Justice Evans
June 16, 2021
As a student worker, I would frequently have to run papers over to Dr. Swinburne's office when he was VP of Student Affairs at SIU-C. Even though I was just a lowly student, he always took the time to come out of his office & greet me. He also pulled some strings for me & got me into a class (that was closed) that I needed to graduate! My condolences to all of his family & friends.
Carole (Treece) Scaggs
School
June 16, 2021
Showing 1 - 3 of 3 results