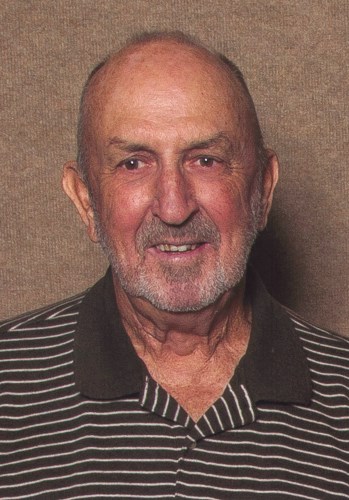 Bud graduated from Herrin High School in 1958. He received a Bachelor of Arts in Music from Southern Illinois University Carbondale and began his 30-year career in teaching band in Norris City, Sparta, and eventually landed in the Zeigler-Royalton School District. He received a Master's Degree in Education Administration in 1976 from SIU. He successfully coached sports for 25 years including boys' basketball, girls' basketball and softball; leading his teams to multiple conference and regional championships.

In 1963 he married Patricia Cruse. After teaching together, they retired in 1994 and drove to 49 states collecting pictures of the state capitols. He spent many years of his life at the ballfield either cutting the grass, lining the fields, hitting fly balls or golf balls, coaching, or watching his grandkids play from the sidelines which is what he loved to do.

Bud was an avid Cardinals fan for his entire life. He enjoyed hunting, fishing, golfing, and playing cards.

Private Services will be in Meredith-Waddell Funeral Home, with the Rev. Alan Milligan officiating. Interment will be in Egyptian Memorial Gardens in Energy.

Meredith-Waddell Funeral Home in Herrin is assisting the family with arrangements.

To share a memory or leave a message of condolence, visit www.meredithwaddell.com.

To plant trees in memory, please visit our Sympathy Store.
Published by The Southern Illinoisan on Nov. 13, 2020.
MEMORIAL EVENTS
No memorial events are currently scheduled.
To offer your sympathy during this difficult time, you can now have memorial trees planted in a National Forest in memory of your loved one.
Funeral services provided by:
MEREDITH-WADDELL FUNERAL HOME
GUEST BOOK
0 Entries
Be the first to post a memory or condolences.