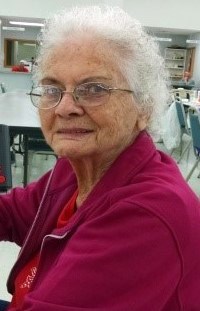 Florence was born, Oct. 2, 1924, in Murphysboro, the third daughter of Charles Reiman and Donna (Brown) Reiman.

She married Arthur E. Flatt in August 1946 on their way to his job with Phil-Tex Oil Co., in Oklahoma following his release from service with USAF during World War II. They moved back to Murphysboro, late 1947 just before the birth of their first daughter, Arkie Lea (Flatt) Burris. Their second daughter LaDonna (Flatt) Wallace followed early 1949.

Throughout the 1950s and 1960s she and her family enjoyed pony racing at many county fairs in Southern Illinois and later thoroughbred horse racing at Cahokia and Fairmount race tracks. She and her family later attended western horse shows throughout the Central Illinois area. Florence was also a member of ISSHA (IL State Stock Horse Association) and for many years attended their yearly 100-mile trail rides.

Prior to and after retirement, she thoroughly enjoyed Bingo at Caritas Bingo Hall in Springfield and gained many friends there.

Cremation rites were accorded by Bisch and Son Funeral Home, Springfield. A private family service will be conducted and inurnment will take place at Pleasant Grove Cemetery, Murphysboro, with assistance from Crain Funeral Home, Murphysboro.

To plant trees in memory, please visit our Sympathy Store.
Published by The Southern Illinoisan on Nov. 14, 2020.
MEMORIAL EVENTS
No memorial events are currently scheduled.
To offer your sympathy during this difficult time, you can now have memorial trees planted in a National Forest in memory of your loved one.
Funeral services provided by:
Bisch & Son Funeral Home
GUEST BOOK
1 Entry
Arkie and Laconia, I am sorry to hear of Florence's passing. She was always so pleasant to me and eager to explain to me about horses. She will be missed...Godspeed Florence
Beckie Chastain-Spencer
Beckie Chastain-Spencer
Friend
October 31, 2020