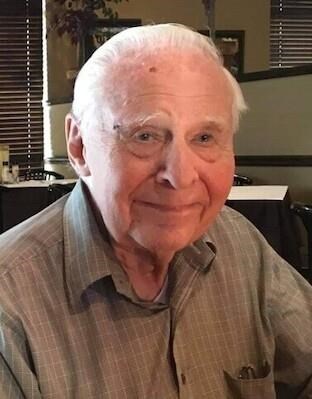 George was born August 27, 1927, in Chicago, Illinois, to George Henry and Ruth (Woods) McAleer. He grew up in Chicago, graduating from Steinmetz High School in June of 1945 and enlisting in the Army Air Corp with hopes of being a pilot. Unfortunately for George, WWII ended shortly after he completed basic training, and he served as a cryptographer for the remainder of his enlistment.

George married Betty Linder on July 5, 1952. They lived in the Chicago suburbs, raising three children and building two homes from the ground up. George worked as a draftsman and a mechanical engineer all over the Chicagoland area, specializing in gearing and designing printing presses and other machinery with a slide rule, a calculator, and his drafting tools. George lived his entire life without ever touching a computer, a fact that gave him much satisfaction.

George dreamed of the desert all his life, and in 1995, George and Betty moved to Ivins to enjoy 26 years of retired living together, attending ICL classes at Dixie State and driving their Jeep all over the Southwest, including to the bottom of the Grand Canyon. George enjoyed reading history and woodworking and passed on to his children his love of airplanes; trains; maps; dogs (and possibly horses); and cheap, junky cookies.

George was preceded in death by his parents and by his elder brother, Eugene Russell McAleer; a niece, Patricia Rocha; and a nephew, Russell McAleer. George was the last of a group of eight high school friends that remained close throughout their lives.

The family would like to thank the amazing staff at Sun Tree Home Health and Hospice of St. George for the excellent care they provided to George over the last several years.

There will be no formal memorial gathering. The Cremation Center of Southern Utah performed cremation services, and the ashes will be scattered sometime in the future in a location yet to be chosen.

Family and friends are invited to share tributes online at SerenityStG.com. Arrangements and memorial tree planting by Serenity Funeral Home of Southern Utah, 986-9100.

Published by Spectrum & Daily News from Jun. 7 to Jun. 13, 2021.
To plant trees in memory, please visit the Sympathy Store.
MEMORIAL EVENTS
To offer your sympathy during this difficult time, you can now have memorial trees planted in a National Forest in memory of your loved one.
Funeral services provided by:
Serenity Funeral Home of Southern Utah
MAKE A DONATION
MEMORIES & CONDOLENCES
Sponsored by Serenity Funeral Home of Southern Utah.
0 Entries
Be the first to post a memory or condolences.