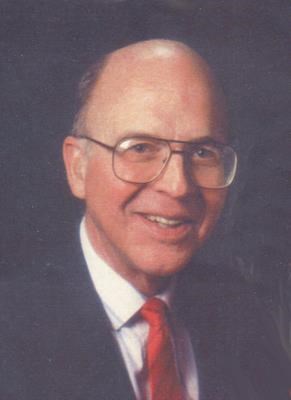 Cedar City - John Quayle "Jack" Cannon Jr. passed away December 27, 2017, at age 85. He lived and left this life as a man of integrity and kindness with an admiring family and countless friends.

Jack was born June 8, 1932, in Washington, D.C., to John Qualye and Anna Laura Stohl Cannon. His formative years living on Hunt Avenue in Chevy Chase, Maryland, were filled with neighborhood games, basketball on the driveway court, family activities, and the formation of faith that would ultimately sustain him throughout his life.

A move in his early teens to Riverton, New Jersey, opened new horizons and relationships, most notably with cute Susie Daniels who lived down the street. Jack and Sue became a bit of an "item" while attending Moorestown Friends School, where Jack played basketball and soccer. He later played baseball at Bates College, and a love and knowledge of sports was a fun and fulfilling part of his life.

Jack served in the United States Army from 1954-56 after high school graduation and attending some college. Prior to finishing his military service, Jack was blessed to marry the cute girl from Riverton, Susan Flora Daniels, on August 13, 1955. They were later sealed in the Salt Lake (LDS) Temple, and Jack adored Sue throughout his life. She preceded him in death on September 24, 2009.

Jack and Sue were known as a kind, loving and faithful couple who were devoted to each other and to their family and friends. People from many walks of life felt loved and accepted in their presence. Sue was an exceptional listener, and Jack loved regaling listeners with his many stories and making personal connections.

Strengthening family members and friends was always the primary focus of Jack's and Sue's lives, interwoven with their faith as devoted disciples of Jesus Christ. They served as ordinance workers in the St. George Utah Temple, in the South Africa Johannesburg Mission from 2001-03, and in other assignments as faithful members of The Church of Jesus Christ of Latter-day Saints. Jack served as a bishop of the Cedar 12th Ward and always had deep love and appreciation for the good people with whom he lived and served. He and Sue also helped others consistently and comfortably in their day-to-day interactions regardless of ecclesiastical assignments.

Jack graduated from Bates College in 1957 and later earned a master's degree from Brigham Young University. He was a distribution analyst for Mobil Oil Company in New York City and spent the majority of his career at Southern Utah University as Director of Financial Aid and Director of Career Placement until retirement in 1995.

A funeral celebrating Jack's life will be at noon Friday, January 5, at the Cedar City Rock Church, 75 E. Center Street, with Bishop Lee Hulet officiating. A visitation will take place that morning from 10:30-11:30 a.m. at Southern Utah Mortuary, 190 N. 300 W., and at the mortuary Thursday, January 4, from 6-8 p.m. Interment will be in the Cedar City Cemetery.

The family wishes to thank the many kind and skilled caregivers, medical professionals and friends who supported Jack during his battle with cancer. Online condolences may be sent to www.southernutahmortuary.com


To plant trees in memory, please visit our Sympathy Store.
Published by Spectrum & Daily News on Jan. 3, 2018.
MEMORIAL EVENTS
Jan
4
Visitation
6:00p.m. - 8:00p.m.
Southern Utah Mortuary (Cedar City)
190 NORTH 300 WEST, Cedar City, UT
Jan
5
Visitation
10:30a.m. - 11:30a.m.
Southern Utah Mortuary (Cedar City)
190 NORTH 300 WEST, Cedar City, UT
Jan
5
Service
12:00p.m.
Cedar City Rock Church
75 E. Center Street, UT
Funeral services provided by:
Southern Utah Mortuary (Cedar City)
MAKE A DONATION
MEMORIES & CONDOLENCES
Sponsored by Southern Utah Mortuary (Cedar City).
15 Entries
As a student at CSU, later SUSC, I LOVED this man! As stated in the obituary, he is a man of integrity and kindness. I remember him very well, because, as, also, stated in the obituary, he made me feel accepted. Was nice to hear of his background. I've just always known him as the really nice guy in the Financial Aids Office.
EllA Duke-Baxter
January 25, 2018
Dear Family,
Your father, grandfather, and brother was a great man. I remember with such fondness my many visits with him since retirement from SUU. I would often run into him at various Cedar City restaurants. He loved life, his lovely wife Sue, and especially his children and grandchildren. He was a kind and caring gentleman. My thoughts and prayers are with you all as you carry the burden of losing someone so loved.
R Scott Phillips
January 15, 2018
He left me with many positive memories of him. He was a man who followed the Lord's example while here on earth and was a great example.
January 7, 2018
May your hearts soon be filled with wonderful memories of joyful times together as you celebrate a life well lived.
January 6, 2018
Dian and Mike, I still think of both of you so fondly when I think of our school days. I remember your Dad as a very quiet man although I didn't know him only watching from afar. I'm sure he was the best because you 2 sure turned out awesome!
Please accept my deepest sympathy. With love,
SueEllen Guymon-Sullivan
January 4, 2018
Mike, I am sorry for the loss of your dad. He was an awesome person. I still remember the time your dad spent with us at the church playing basketball. I am glad for the time I had knowing your mom and dad. You can tell what type of parents you had by looking at your family. I'm sure they were proud of their kids.
David Howell
January 4, 2018
Jack truly inspired me with his insight, his stories, and his quiet strength. I always looked forward to time spent with him. He is one of those people who is genuinely concerned with others and their well being. The many hours spent in his home seem more to my benefit than to his and I am a better person from our time spent together. I am so grateful for the time spent together and for the many things I learned from Jack. He is a blessing in my life and I will miss this great man.
Toni Neilson
January 4, 2018
Mike, Dian so sorry for your loss. It is comforting to know they are together again. Best wishes
Todd Spencer
January 3, 2018
Mike, Shauna, Dian and families, so very sorry for your loss. Lynne Hartling
Lynne Haywood
January 3, 2018
Dian,

Thoughts and prayers for you and your family.
Love you,
Kim
January 2, 2018
I'm so sorry for your loss, Dian and family. I have such fond, everlasting memories of your sweet parents at church, in the community and especially the many many times I was in your home. What a great man he is. Families are forever!
Wendy Bennett
January 1, 2018
MIKE AND SHAUNA SO SORRY TO HEAR ABOUT YOUR DAD'S PASSING. SOUNDS LIKE HE LIVED A WONDERFUL LIFE. BECAREFUL. LOVE YOU GUYS.
ANNE AND ROY
ROY and ANNE STEEN
January 1, 2018
Such good memories of this awesome man!
Jay and Susan Adams
December 31, 2017
Jack it was a privelege to have met you a short time ago. I immediately enjoyed YOU...your spirit and your personality. It was a wonderful experience to be able to have come to your home Christmas Eve for a visit....and to sing a Christmas carol to You and Lucy. It was a blessing for our family. Because of our Heavenly Father's wonderful Plan of Salvation....I know where you are....and whom you are witb.
Robert Cooper
December 31, 2017
Much love to your family.
Laura Justensen
December 30, 2017
Showing 1 - 15 of 15 results