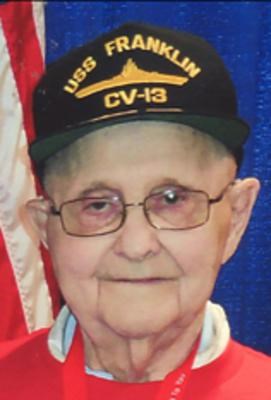 Muncie - Richard Clement Fink, age 90, of Muncie, went to Heaven to be with the Lord, on Saturday, August 22, 2015 at Morrison Woods Healthcare Campus, Muncie.

Born on April 17, 1925 in Licking County, Ohio, he was the son of H. Russell and Helen (Loughman) Fink. Richard has been a Delaware County resident since 1941, when he moved here with his family, at age fourteen.

Richard attended Harrison Township High School and graduated with the Class of 1947, after having served in the U.S. Navy during WW II from September 1943 to May of 1946, when he was honorably discharged.

Richard was recalled to active duty in September of 1951 during the Korean Conflict, and served at Great Lakes, Illinois, until October of 1952, when he was honorably discharged again from the Navy. He served in the South Pacific on the U.S.S. Franklin CV-13 and was a plank owner. He also served on the U.S.S. Lexington CV-16 and was in Tokyo Bay on August 7, 1945 when the atom bomb was dropped on Hiroshima.

Richard worked as a manufacturing engineer at Borg Warner Automotive for forty-one years, until his retirement in 1994.

His memberships include Warner Gear Sympathy Club and Ball Memorial Hospital Volunteer, where he accumulated over 15,000 hours of service. He also attended North Side Church of the Nazarene in Muncie.

Richard and his wife Wanda were presented with the VIVA award in 2015. He also went on the Honor Flight to Washington D.C. with his son Bill in April of 2015.

Funeral services for Richard will be held at 11:00 a.m. on Wednesday, August 26, 2015 at the funeral home with calling one hour prior to service.

Burial will follow in the Gardens of Memory Cemetery, Muncie, with military graveside rites conducted by the Delaware County Honor Guard and U.S. Navy.

Memorial contributions in memory of Richard may be made to I.U. Health Ball Memorial Cardiac Unit or to North Side Church of the Nazarene.

Online condolences may be made at www.gardenviewfuneralhome.com.


To plant trees in memory, please visit our Sympathy Store.
Published by The Star Press on Aug. 24, 2015.
MEMORIAL EVENTS
No memorial events are currently scheduled.
To offer your sympathy during this difficult time, you can now have memorial trees planted in a National Forest in memory of your loved one.
Funeral services provided by:
Garden View Funeral Home
MAKE A DONATION
MEMORIES & CONDOLENCES
8 Entries
Sorry for your loss . It was a pleasure to meet this man and family recently. Nurse Ginny
Ginny Main
August 26, 2015
So sorry to hear of your loss, Mr Fink was a very nice and generous man and I know that the Triumphat guys loved him dearly
Michelle Inman
August 25, 2015
Wanda: I'm so sorry for your loss. You and your family will be in our thoughts and prayers.
Donna Cray
August 25, 2015
Wanda, I'm so sorry for your loss. I always enjoyed my times with you & Dick and loved you both as if you were own grandparents. We'll be praying for you for comfort & peace.
Matthew Hodge
August 24, 2015
What an awesome legacy. He was a wonderful person. So sorry for all the family's loss. You're in our thoughts & prayers. God bless you all in the days ahead.
Melinda Stinson
August 24, 2015
Gloria,
I'm so sorry for your loss. You and your family are in my prayers. I love you.
Jane Orr
August 24, 2015
Gloria I am so sorry for your loss. Prayers for comfort my friend.
Lynn Kopach
August 24, 2015
Wanda - I am so truly sorry for your loss and pray that you find some comfort in knowing Dick's suffering has ended. I will miss his humor, cheery and sweet demeanor, hugs and his warm smile each time we met. Dick was such a kind and caring man who gave so much of himself in sevice to others. Having you both in my life has been a true blessing and my love and prayers go out to you Wanda!
Ann McGuire
August 24, 2015
Showing 1 - 8 of 8 results