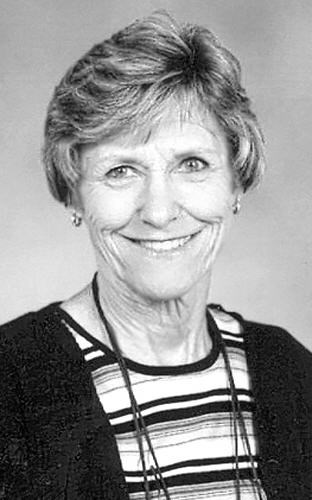 FUNERAL HOME
Bullock Funeral Home
1190 Wilson Hall Road
Sumter, SC
Paula Gayle Aldous Howell SUMTER - Paula Gayle Aldous Howell, 75, died on Thursday, March 31, 2016, in Palmetto Health Tuomey Regional Medical Center. She was born in Montevideo, Minnesota, and raised in Aberdeen, South Dakota. She was the daughter of the late Lloyd and Mary Helen Aldous. She is survived by her husband of 51 years, George C. Howell, two sons, Martin St. George Howell of Greenville, South Carolina, and Ashley Philip Howell and his wife, Ashley Vassilaros, of James Island, South Carolina. Also a sister-in-law, Gloria Aldous and nephews Jason and Kyle, and a brother-in-law, Rolfe Ludtke, and nephew, Paul Daly. She was preceded in death by a brother, William Aldous of Surprise, Arizona, and a sister, Linda Ludtke of Webster, South Dakota. She worked in Charleston and Sumter public schools, where she was a Media Specialist at Hillcrest High School and Garret Academy. Paula also volunteered at Tuomey Regional Medical Center for eight years. She was a graduate of Central High School and Northern State University, Aberdeen, South Dakota, and the University of South Carolina. Paula participated in the English as a Second Language Program teaching in the Ukraine for twelve years where she made many great friendships that have given her enormous happiness in her life as all became part of her extended family. She dearly loved her family and friends, was a world traveler, and avid tennis player. No adventure was too big of an undertaking and she was unafraid to go anywhere, even by herself. A graveside service will be held in Fort Jackson National Cemetery in Columbia on Monday, April 4th at 11:00 a.m. Memorial reception immediately to follow at Travinia Restaurant in Columbia. In lieu of flowers, donations can be made in her name to: Aberdeen Public Schools Foundation, Inc., 1224 South 3rd St., Aberdeen, SD 57401 - Rising Scholars Endowment. You may go to www.bullockfuneralhome.com and sign the family's guest book. The family has chosen Bullock Funeral Home for the arrangements.

Published by The State on Apr. 2, 2016.
To plant trees in memory, please visit the Sympathy Store.
MEMORIAL EVENTS
To offer your sympathy during this difficult time, you can now have memorial trees planted in a National Forest in memory of your loved one.
Funeral services provided by:
Bullock Funeral Home
MAKE A DONATION
MEMORIES & CONDOLENCES
5 Entries
My sincere condolences to the Howell family. Comfort can be found in God's Word recorded at Ecclesiastes 9:5,10 regarding the loss of your loved one.
Meg
April 7, 2016
Prayers for family. She was a great librarian and friend to my mom, Ms montieth. Sorry for your loss.
Marla Ross
April 6, 2016
I will always remember Paula as the best and most efficient librarian I've ever known. She had a way of winning people over to reading, especially at Hillcrest High. Kids loved her energy and enthusiasm about reading and about life. Will miss Paula and her good advice about media things especially.
Joyce Hunter
April 6, 2016
Paula was a good friend when I would ask for her help with Alice Drive Baptist's library. I would see her at Baker's Sweets on Saturday and she would always give me the advice I needed to help make our library better. I also worked with her at Hillcrest High when she was media specialist and I was an English teacher there. She had a sweet adventurous spirit that we all loved. Will miss her smiling face on Saturday at our favorite meeting place.
Joyce Hunter
April 6, 2016
I am so saddened by the Loss of my Dear Friend Paula. We were Friends since High School & College at NSU in Aberdeen. Each year after she married George she would come back to see her mom and dad.Then we visited about her trips to the Ukraine and see all her Pictures. What fun we always had. I shall miss her greatly.May God Bless her family. She loved them very much.And she was very Proud of her son's & George. She was,also, a Spark at all our reunions..She will be missed by our entire Graduating Claa,I am sure.
Marjorie (Marge) White
April 2, 2016
Showing 1 - 5 of 5 results