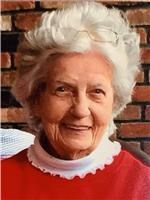 FUNERAL HOME
Cheetham Funeral Home - Pawtucket
1012 Newport Avenue
Pawtucket, RI
Ann T. (Burley) Rec, 101, passed away peacefully on Friday, November 26, 2021. She was the beloved wife of the late Boleslaw J. Rec for over sixty years. Born in Pawtucket, she was the daughter of the late Henry and Sarah (Quinn) Burley.

Ann graduated from the former Sacred Heart in Pawtucket and was a lifelong resident of the city. She was a communicant of the former Sacred Heart Church and St. Teresa Church, Pawtucket. Ann worked as a payroll clerk for the City of Attleboro for many years prior to retiring in 1985. She enjoyed going to Foxwoods Resort Casino and taking long walks with her late husband and grandchildren.

She is survived by two daughters, Carol Esmeraldo and her late husband, Manny, of North Attleboro and Joyce Facteau and her late husband, Wayne, Sr., of Pawtucket; four grandchildren, Melissa Everson, Michael Esmeraldo and Wayne, Jr. and Jennifer Facteau; seven great-grandchildren; a great-great-granddaughter and a niece, Agnes Santorelli. She was the sister of the late James Burley.

A private Mass of Christian Burial will be celebrated in St. Joseph Church, Pawtucket, followed by interment with her late husband at Mount Calvary Cemetery, Cumberland. Visitation and floral tributes are respectfully omitted. Memorial donations to Madonna Manor, 85 N. Washington St., North Attleboro, MA 02760 would be appreciated. Funeral arrangements are entrusted with Cheetham Funeral Home, 1012 Newport Ave., Pawtucket. CheethamFuneralHome.com
Published by Sun Chronicle on Nov. 30, 2021.
To plant trees in memory, please visit the Sympathy Store.
MEMORIAL EVENTS
To offer your sympathy during this difficult time, you can now have memorial trees planted in a National Forest in memory of your loved one.
Funeral services provided by:
Cheetham Funeral Home - Pawtucket
MAKE A DONATION
MEMORIES & CONDOLENCES
Sponsored by Cheetham Funeral Home - Pawtucket.
0 Entries
Be the first to post a memory or condolences.