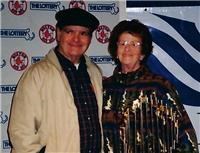 ABOUT
Attleboro High School
FUNERAL HOME
Duffy-Poule Funeral Home - Attleboro
20 Peck Street
Attleboro, MA
Carole J. (Chevrier) Adams, passed away peacefully on Monday, November 8, 2021 at 88 years of age. Beloved wife of the late Richard V. Adams of 63 years before his passing on February 13, 2017. Daughter of the late Emma (Soper) and Alfred Chevrier. Loving mother of Lori Adams-Huyett (George Harnden) of Plainville; Karen Silvia and her husband William of Danbury, NH; Cynthia Adams (Carl Peloquin) of N. Attleboro; Jaqueline Adams of Andover, NH; and Richard K. Adams of Orange. Cherished grandmother of Holly Surgens, Molly Huyett and Daniel Huyett. Great grandmother of 2. Adored sister of the late Lillian Reynolds; Florence Joseph; and Grace Fitton. Carole also leaves many nieces and nephews. Carole was born and raised in Attleboro where she attended Attleboro High School and graduated in 1952. She met Richard when they worked at Balfour in 1952 and lived in Attleboro for a total of 56 years until they moved to Bourne when Richard retired in 1989 from the Robbins Company where they lived for 31 years. Carole worked at Sturdy Memorial Hospital for 28 years and retired in 1996. Carole as a life-long card player with weekly gatherings with her sisters, niece and nephews. Richard and Carole formed a small group of friends on Cape Cod to continue their card games. Carole never turned down a challenge for a game of Scrabble or Trivial Pursuit. They both were avid and loyal Red Sox Fans and never missed a game on T.V. Richard sang with the Attleboro Barber Shop Chapter for 30 years and was the President of the Cape Cod Chapter Barbershop for 10 years. He loved to sing either in a large group or in a quartet. Richard was an avid boater and loved fishing. Both Carole and Richard were at most peace when near the water, especially their beloved Cape Cod. Richard passed along his love of the outdoors to all five of his children. They both volunteered for years as transport assistants for the Bourne Council on Aging. The Adams family would like to give a special thanks to the nursing staff of the Rockport Wing at Maples Rehab. We are extremely grateful of the care they showed to our mother! Relatives and friends are invited to attend a Graveside Memorial Service on Friday, November 19, 2021 at 11 AM at St. John's Cemetery, 165 West Street, Attleboro. In lieu of flowers, donations in both Carole and Richard's name, may be made to MSPCA of Cape Cod, 1577 Falmouth Road, Centerville, MA 02632 (www.mspca.org).
Published by Sun Chronicle on Nov. 15, 2021.
To plant trees in memory, please visit the Sympathy Store.
MEMORIAL EVENTS
To offer your sympathy during this difficult time, you can now have memorial trees planted in a National Forest in memory of your loved one.
Funeral services provided by:
Duffy-Poule Funeral Home - Attleboro
MAKE A DONATION
MEMORIES & CONDOLENCES
Sponsored by Duffy-Poule Funeral Home - Attleboro.
1 Entry
Cindy, Stan and I are so sorry for your moms passing. We witnessed the unwavering and constant support you gave to your mom. Your devotion your kindness and especially your love. God bless and may your mom rip.
Debbie macroberts Stan sroka
Other
November 16, 2021
Showing 1 - 1 of 1 results