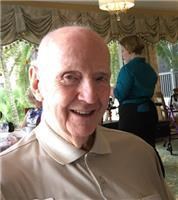 Mr. Pittman was born Nov. 15, 1928 to Corbett and Alfreda (Stratton) Pittman and grew up in the Roslindale section of West Roxbury, Mass.

He attended Boston public schools and graduated from Boston English HS in1946, later attending Wentworth Institute and graduating from Northeastern University with a degree in Mechanical Engineering.

He served honorably with the US Army for three years in the Korean War with Combat Engineering and in IX Corps Intelligence.

Mr. Pittman was a long term resident of North Attleborough, Mass and worked as a mechanical engineer for over 30 years at the Foxboro Company. He was a long time congregant of Grace Episcopal Church, Mr. Pittman was active and served in many roles at the church and was the director of the St. Christopher's Guild.

Mr. Pittman was a talented musician, carpenter and furniture maker in his spare time. He built a home in Gray Gables near the Cape Cod Canal and in his retirement enjoyed travelling to Europe, biking, boating, volunteer work and a home in Florida.

He was much beloved by his family and all who knew or came into contact with him.
His favorite advice to all in later years was "Don't get old".

He is survived by his wife of 68 years Elaine Spurrier Pittman, his son James and daughter-in-law, Jennifer Pittman, daughter Linda Washington, as well as 9 grandchildren and 4 great-great grandchildren.

Calling hours are omitted and a memorial service will be held at a later date.

Fond memories and expressions of sympathy may be shared at www.nickersonbourne.com for the Pittman family.
Published by Sun Chronicle on Nov. 16, 2021.
To plant trees in memory, please visit the Sympathy Store.
MEMORIAL EVENTS
To offer your sympathy during this difficult time, you can now have memorial trees planted in a National Forest in memory of your loved one.
Funeral services provided by:
Nickerson-Bourne Funeral Home
MAKE A DONATION
MEMORIES & CONDOLENCES
Sponsored by Nickerson-Bourne Funeral Home.
3 Entries
Jim, Please accept my condolences and prayers at this sad time. Your Father sounded like a great man. Best, John
John Krauth
November 16, 2021
So sorry to hear about Corb. Many blessings and condolences to his wonderful family and to his lovely, sweet wife, Elaine..
Helene Fuchs
Friend
November 15, 2021
We wish to extend our deepest sympathies at this difficult time.
The Staff of Nickerson-Bourne Funeral Home
November 16, 2021
Showing 1 - 3 of 3 results