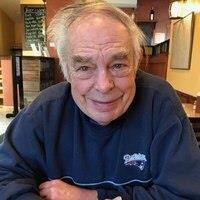 A graduate of Dighton High School, he received a degree in agriculture from the Stockbridge School of Agriculture at the University of Massachusetts. Edward founded Attleboro Rehoboth Building Supplies in 1986, now operated by his son, and retired from the business twenty-five years ago.

He proudly and honorably served our country in the United States Army during the Korean war.

A warm, caring, and generous man, Edward's life centered around his commitment to his community and to his family. He was a volunteer fireman, achieving the rank of Captain, for the North Rehoboth Fire Department; served as a town selectman; football coach; and little league coach for the Wildcats, Indians, instilling the value of being a "winner" in his teams, and having led six of the eight championship little league baseball teams under his watch. He enjoyed camping in Myrtle Beach, Florida, and on Cape Cod, and was an ardent fan of the Red Sox and the Patriots. More than anything, Edward cherished his family and the time spent with them.

He was the loving father of Edward "Butch" John Bliss Jr. and his wife, Barbara Bliss, of Rehoboth, MA; and Peter James Bliss and his wife, Karla M. Bliss, of Charlestown, MD. Edward was the proud grandfather of Bethany Costa, Jacob Bliss, Nathan Bliss, and Emily Bliss, and the adoring great-grandfather of Gabriel Costa, Hadley Bliss, and Greta Bliss. He was the brother of Beverly Roy of Dennis, MA, and William Bliss of Hanover, MA. Edward leaves his extended family and many dear friends.

With strict adherence to applicable Covid-19 health precautions, including social distancing and the use of facemasks, family and friends are cordially invited to attend Visitation with Veteran's Honors on Saturday, September 25, 2021, from 10:00 a.m. until 12:00 Noon in the "Memorial Chapel" of the Dyer-Lake Funeral Home, 161 Commonwealth Avenue, Village of Attleboro Falls, North Attleboro, MA, followed by a Funeral Service at 12:00 Noon at Dyer-Lake Funeral Home.
A Graveside Service will immediately follow the funeral service on Saturday, September 25, 2021, in Rehoboth Village Cemetery, Bay State Road, Rehoboth, MA.
As an expression of sympathy and in lieu of flowers, donations may be made in memory of Edward to St. Jude Children's Research Hospital, 501 St. Jude Place, Memphis, TN 38105 or online at https://www.stjude.org.

For additional information or to send the family a written expression of sympathy, please visit an online guest book at www.dyer-lakefuneralhome.com.