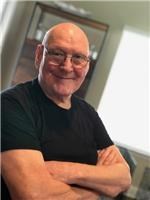 Born in Portsmouth, VA, Jim was the son of the late Anita D. Metivier and Harrie W. Titus. As part of a Navy family, Jim lived in several states and settled in Arizona before returning to Massachusetts.

Jim enjoyed his employment as a shipper/receiver at TASCO in East Providence until health issues prevented him from working. He was also employed at Raytheon in Norwood in the 70's, and at a rocket factory in AZ.

In 1970 Jim volunteered and served his country honorably in the United States Navy.

An avid collector Jim amassed an impressive DVD collection as well as a vinyl record collection of primarily 60's & 70's Classic Rock. A huge Beatles fan, Jim learned to play guitar as a teenager and continued to play throughout his life. He often joked he was the "world's okayest guitar player." Jim enjoyed the company of several pet dogs and cats over his lifetime, he loved to garden, and decorate for the holidays. He had several hot rods as a young man and enjoyed attending car shows with his cousin Mike. Jim was an outgoing people-person who lived life to the fullest and loved to laugh. His motto was "If I can leave them smiling, I've done my job." Jim demonstrated tremendous strength and bravely, never complaining while battling his disease always with a smile on his face.

At his request, donations in Jim's memory may be made to:

Prostate Cancer Research Fund
c/o Dr. Glenn Bubley at CLS 449
Beth Israel Deaconess Medical Center
330 Brookline Ave.
Boston, MA 02115
Published by Sun Chronicle on Nov. 30, 2021.
To plant trees in memory, please visit the Sympathy Store.
MEMORIAL EVENTS
To offer your sympathy during this difficult time, you can now have memorial trees planted in a National Forest in memory of your loved one.
Funeral services provided by:
Sperry & McHoul Funeral Home
MAKE A DONATION
MEMORIES & CONDOLENCES
Sponsored by Sperry & McHoul Funeral Home.
5 Entries
RIP Jim.
Keith Call
December 3, 2021
we sure had a lot of fun at Raytheon. thanks for being my friend.
Johnna Erwin
December 2, 2021
RIP
Wendy Call Morgan
Friend
December 1, 2021
I will miss you my friend.
Ginny Armstrong
November 30, 2021
Jim, thank you for sharing your life with me. RIP. You enriched my life in so many ways. I´ll always love you.
Shelley Call
Family
November 30, 2021
Showing 1 - 5 of 5 results