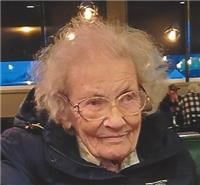 BORN
1926
DIED
2021
ABOUT
Mansfield High School
FUNERAL HOME
Sherman & Jackson Funeral Home
55 North Main Street
Mansfield, MA
Janet S. (Buck) Haskell, age 95, a lifelong resident of Mansfield, passed away peacefully on Monday, November 15, 2021 at the Village at Willow Crossings in Mansfield. She was the beloved wife of the late Chester H. Haskell, to whom she was wed for over fifty years at the time of his death on March 27, 1999.

Born in Mansfield, MA on January 24, 1926, she was a loving daughter of the late Ralph A. and Fannie (Epstein) Buck.

Janet grew up and was educated in Mansfield. She was a 1944 graduate of Mansfield High School and a graduate of the Chamberlain School of Retailing. Prior to retiring, Mrs. Haskell had worked as a Data Entry and Coding Clerk at the Foxboro Co. in Foxboro.

Janet's focal point of her life was raising her adoring family and providing exception care for her late husband. She was a former active member of the Assembly of God Church in South Attleboro and more recently attended the First Baptist Church of Mansfield.

Janet enjoyed gardening and maintaining rock gardens at her former residence on Spring Street in Mansfield, sewing, knitting, crocheting, was an amazing seamstress and will always be remembered for her exceptional cooking skills.

She is survived by her devoted children: June E. Fleischmann of North Attleboro, Benjamin B. Haskell and his wife Peggy of Centerville, Darrell Haskell and his wife Anne-Marie of South Hamilton, Marcia L. Anzalone and her husband Anthony of Upton, Gary C. Haskell and his wife Lisa of Exeter, RI and the late Linda D. Haskell. She was the dear sister of Richard Buck of North Andover, Curtis Buck of Norton, Christine Owens of Buckeye, AZ and the late Louise Stupack and Roger Buck. She is also survived by her cherished 11 grandchildren, 12 great grandchildren, as well as several generations of loving nieces and nephews.

Her funeral service will be held on Friday, November 19th at 11:00 A.M. in the First Baptist Church, 52 North Main St, Mansfield. Burial will follow at the Spring Brook Cemetery in Mansfield.

In lieu of flowers, donations in Janet's honor may be made to the memorial fund of the First Baptist Church, 52 North Main St., Mansfield, MA 02048.

To send her family a message of condolence, please visit www.shermanjackson
Published by Sun Chronicle on Nov. 17, 2021.
To plant trees in memory, please visit the Sympathy Store.
MEMORIAL EVENTS
Nov
18
Visitation
5:00p.m. - 8:00p.m.
Sherman & Jackson Funeral Home
55 North Main Street, Mansfield, MA
Nov
19
Funeral service
11:00a.m.
First Baptist Church
North Main St, Mansfield, MA
Funeral services provided by:
Sherman & Jackson Funeral Home
MAKE A DONATION
MEMORIES & CONDOLENCES
Sponsored by Sherman & Jackson Funeral Home.
1 Entry
June, I am so sorry to hear about mom. She was an incredible lady and I was honored to have been able to spend time with her. I am sending you thoughts and prayers and want to thank you for sharing her with me.
Vicki Astuccio
Friend
November 22, 2021
Showing 1 - 1 of 1 results