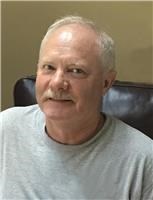 Lawrence "Larry" Graham Flint, 67, of North Attleboro, MA, passed away on Tuesday, September 14, 2021, at Sturdy Memorial Hospital in Attleboro, MA. He was the beloved husband of Linda Marie (Grudzien) Flint, whom he married on November 3, 1973.

Born on April 24, 1954, in Hayward, CA, he was the loving son of Graham Corbin Flint and Marlene (Derthick) Flint of Hayward, CA.

A graduate of Tennyson High School in California, he attended trade school in Rhode Island and worked for thirty-eight years at Tasca Ford, both as a mechanic and as the manager of the Quick Lane in Cranston, RI, before retiring in 2014. A resident of North Attleboro since 1991, he previously lived in Central Falls, RI. Larry proudly and honorably served our country as a "Seabee" in the United States Navy.

A man of strong faith, he was a member of Transfiguration of the Lord Parish at St. Mary Church in North Attleboro, where for many years he was an active member of the St. Vincent de Paul Society.

Larry enjoyed playing bass guitar, especially "House of the Rising Sun"; working on old cars; and had been a certified rescue scuba diver. He was a member of the Garfield Social Club in Central Falls, RI; a member and past President of the Stoney Brook Gun Club in Lincoln, RI; the Cumberland Beagle Club; the Fraternal Order of Police in Barrington, RI; and had served as an Assistant Scout Master for Boy Scouts of America Troop 32 in North Attleboro. More than anything, Larry cherished his family and truly treasured the time he spent with them.

In addition to his wife and parents, Larry leaves his loving children: Lisa Marie Flint of North Attleboro, MA; and Travis R. Flint and his fiancée, Katelyn Griffin, Esq., of North Attleboro, MA. He was the dear brother of Gloria Reed and her husband, Larry Reed, of Sacramento, CA; the brother-in-law of Diana Marie Huff of West Warwick, RI, and her late husband, Lee Huff; and the brother-in-law of David Grudzien and his wife, Terry Grudzien, of Saunderstown, RI.

For additional information or to send the family a written expression of sympathy, please visit an online guest book at www.dyer-lakefuneralhome.com.