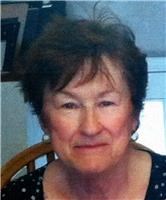 Lorraine E. (Dustin) Connaughton, age 83, of Mansfield, passed away peacefully, in the presence of her loving family on Monday, September 13, 2021 at Care One at Newton. She was the beloved wife of the late Paul E. Connaughton, to whom she was wed for fifty-eight years at the time of his death on January 6, 2014.

Born in Boston, MA on July 8, 1938, she was a loving daughter of the late James and Mary (Ferguson) Dustin.

Lorraine grew up in the Jamaica Plain neighborhood of Boston and was a graduate of Jamaica Plain High School. She was a dedicated homemaker to her adoring family and prior to retiring, had worked as a Benefits Administrator for the New England Life Insurance Company in Boston.

Lorraine was a resident of Mansfield for the past twenty-nine years and was very involved in the community she called her new home. She was a woman of deep religious faith and an active communicant of Saint Mary's Church in Mansfield. She was a member and served for five years as vice president of the Catholic Women's Club, was a member of the Rosary Group, Saint Mary's Bowling Club and along with her good friend Lorretta, was a member of the helping hands committee which assisted grieving families with funeral collations. She was also actively involved with the Mansfield Council on Aging.

Mrs. Connaughton was very generous with her time and delighted in helping others. She faithfully visited nursing homes and drove the elderly to many doctor's appointments in Mansfield and out of town. She also enjoyed day trips with the seniors, Lake Pearl monthly lunches and ceramic classes.

Lorraine's family was the essence of her life. She had many grandchildren and did so much for all of them, always offering to help out so the parents could have a night out or to drive them to school and other places. Lorraine's other hobbies, which she shared with her late husband Paul, included going to the movies, bowling, line dancing and trips to Florida, California and Niagara Falls. She also loved cruises to Bermuda and the Caribbean with family and friends, and yearly trips with her family to Loon Mountain.


She is survived by her devoted children, Paul M. Connaughton and his wife Catherine of Mansfield, John E. Connaughton of South Boston, Lori J. Powell and her husband George of Londonderry, New Hampshire and James E. Connaughton and his wife Ranee of Norton. She was the dear sister of Edward Dustin of Mansfield, John Dustin of Holbrook and the late Marion Perkins. She was the cherished grandmother of PJ, Rob, Shaun and Ryan, Matt, Joey and Kristina, Alyssa, Jimmy, Reily, Lily and Liam, and the great grandmother of Mason, Bella and Baby Noah Connaughton. She is also survived by many loving nieces and nephews.

Her Funeral Mass will be celebrated on Saturday, September 18th at 11:30 A.M. in Saint Mary's Church, 330 Pratt Street (Route 106) Mansfield. Burial will follow at Saint Joseph's Cemetery in West Roxbury.

In lieu of flowers, donations in Lorraine's memory may be made to Saint Mary's Church, 330 Pratt Street, Mansfield, MA 02048