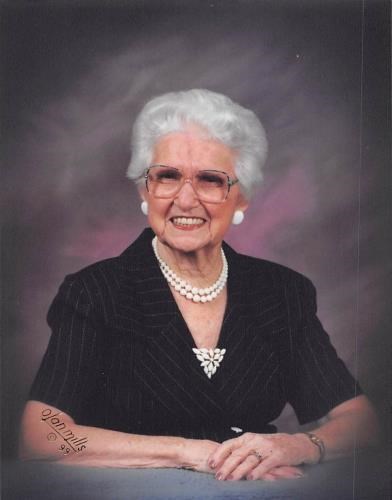 Hazel Madge Sheppard Rorie Shelley, aged 104 years, six months and three days, of Cabot, went home to be with the Lord on September 26, 2021. She was born March 24, 1917 in Climax, Arkansas (a now non-existent town in the Ash Flat area) to the late Lotus and Isophene Sheppard. Madge was the oldest of ten children.

On April 9, 1938, Madge married the love of her life, Walter Alden Rorie, in Seminole, Oklahoma. Throughout their lives together, they lived in Oklahoma, California and Arkansas and had three children – Anita, Waldon and Mildred. While the children still lived at home, Madge was a wonderful housewife and mother. When the children had all left the nest, she worked for ten years at the Mare Island Naval Base in Vallejo, California before she and Alden moved to Cabot, Arkansas.

When Alden became ill, they relocated to Oklahoma City to be near their daughters, who could help with his care. Alden went home to be with the Lord on July 10, 1983. Alden and Madge had been very good friends with Stirman "Buster" and Eloise when they all lived in Cabot. Not long after Alden's passing, Eloise also passed. Madge and Buster renewed their friendship while he was visiting his sister in Oklahoma City. They married on March 9, 1986 and moved back to Cabot. Buster also went home to be with the Lord on December 1, 1992. For the last ten + years, Madge has lived with her daughter, Anita, in Rose Bud, Arkansas.

Madge and both of her husbands loved the Lord and worked in churches wherever they lived. The three of them helped spread the Word of God in many different places by either doing the work themselves or by helping to support the missionaries around the globe. After her husbands' passing, Madge continued to be a prayer warrior and told many people of her faith in God.

She enjoyed many types of arts and crafts projects, such as sewing, crocheting and quilting. Madge loved making her own clothes, as well as clothes for her children and grandchildren. She would even cover her shoes and purses to match her outfits. While living in Oklahoma City, she made choir robes for her church in Del City. She also had a passion for making and decorating cakes for all occasions.

One thing many people talk about and remember about Madge is her high heeled shoes. She wore them everywhere she went, every day. She worked in the corn fields and gardens wearing her high heels. She wore them to the beach and on hiking trails. She even wore them while riding behind Alden on a tandem bicycle. She wore her first pair of flats when she was in her nineties.

Instead of sending flowers, the family requests that you make donations in memory of Madge Shelley to where God's Word will be spread, such as your church missions program.

Funeral services for Arkansas will be 3 p.m., Friday, Oct. 1, 2021 at First Baptist Church-Cabot. Visitation will be one hour prior to the service at the church. Graveside services will be 1 p.m., Saturday, Oct. 2, 2021 at Arlington Memory Gardens in Oklahoma City, Oklahoma. Arrangements by Moore's Cabot Funeral Home, 501-843-5816. Please sign our online guestbook for the Shelley family at www.moores cabotfuneralhome.com.