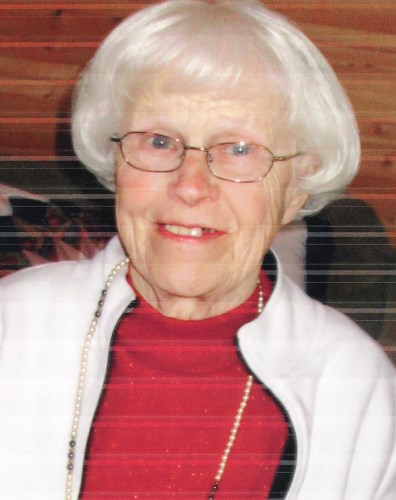 Lila Johnson passed away at Legacy Garden in Pender, Nebraska, on October 30, 2021, from complications with dementia. She was 95 years old.

Lila was born on Valentine's Day, Feb. 14, 1926, on a farmstead near Decorah, Iowa, to Walter and Gladys (Jacobson) Grindeland. Shortly thereafter, the family moved to Decorah where Lila attended school, graduating in 1943. At the age of 16, she began working for Northwestern Bell Telephone as a switchboard operator.

After World War II, Lila married Dale Johnson in 1946 at the First Lutheran Church in Decorah. To this union three children were born: Kristie, Ronnie, and Douglas. The family lived in West Union, Iowa, until moving to Lemars, Iowa, in 1960. Dale became the principal at Lemars Junior High School, and Lila worked in Sioux City for Northwestern Bell.

She retired after 31 years of service as regional manager and group chief operator. Dale and Lila then moved to Heber Springs, Arkansas, building their retirement home overlooking Greers Ferry Lake. They were both active members of Hope Lutheran Church.

Lila was preceded in death by her parents, her husband Dale (2004), her two sons Ronnie and Douglas, brother Merlin and sister Esther. She is survived by her daughter Kristie (Rod) Sailors of Lyons, Nebraska, six grandchildren and 15 great-grandchildren.

A special thank you goes to the staff at Legacy Garden in Pender and the Hospice angels from Asera.

Private family services will be held at a later date

Published by The Sun Times on Nov. 9, 2021.
To plant trees in memory, please visit the Sympathy Store.
MEMORIAL EVENTS
To offer your sympathy during this difficult time, you can now have memorial trees planted in a National Forest in memory of your loved one.
MEMORIES & CONDOLENCES
0 Entries
Be the first to post a memory or condolences.