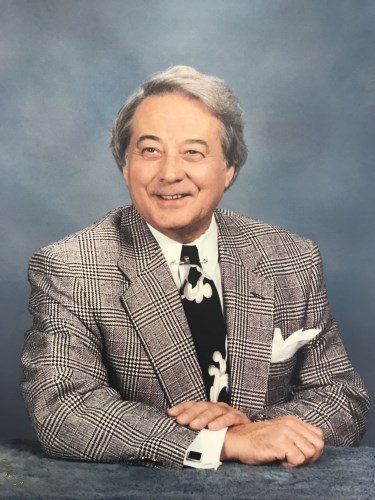 Samuel A. Pallone of Heber Springs left this world on Nov. 8 after battling the effects of a stroke he suffered months earlier.

Sam was born Sept. 19, 1935 in Pittsburg, PA. to Alfonse and Elizabeth Pallone. He was the youngest of three children. He was preceded in death by his brother Ross Pallone and his sister Pricilla Pallone.

During High School Sam enlisted in the Navy Reserves and began training to become a submarine Sonarman. He excelled quickly and became a sonar instructor. After high school Sam enrolled in a new program at Penn State University which at that time was called Electrical Design. This program involved the drafting and design of electrical circuitry and schematics. Soon after completing this program, he was hired by the Blaw-Knox Company, a huge construction firm that had worked on the Panama Canal.

He worked on several large projects, one of which required him to move to Denver, CO. While in Denver he joined the Sports Car Club of America and started amateur sports car racing. He raced in a red Corvette with white racing stripes and used the number 222.

It was in Denver where he met a man from Arkansas who worked for the Martin Marietta Company and encouraged him to apply for a job. Sam applied and was offered a position working on the Titan II atomic missile project and moved to Little Rock, AR. It was here that he met Sharon Raney. They soon fell in love and married in 1964. After their marriage Sam was awarded a prestigious position at Cape Canaveral, FL. working on the Gemini and Saturn projects for NASA. After completing these projects, they moved back to Little Rock and Sam joined T.J Raney and Sons, an investment banking firm founded by Sharon's grandfather in 1931.

Their marriage ended in 1977 and in 1979 Sam married Sandra Wheat Orsini. They lived in the Heights area of Little Rock and enjoyed adventurous travel, riding motorcycles, camping and hiking. It was during this time Sam and a partner opened an outdoor supply store they dubbed "Take a Hike."

The popularity of outdoor recreational activities began to boom in the 1980's and they opened a second store in west Little Rock. Sam and Sandra's marriage ended in 1992 and Sam became a bachelor again at the age of 57. Sam ended a very successful career in the securities business and retired.

In hindsight, he was very thankful for being able to work during the golden era of the investment industry.

He moved into an apartment complex in Little Rock and began designing and building intricate and ornate decks, gazebos and sun rooms. During this time, he met a beautiful nurse that lived in his apartment building by the name of Kay Saunders and was smitten.

They married in 1996 and moved to the warm, white beaches of Panama City Beach FL. In 2006 they moved to Humboldt, TN. to be closer to Kay's family. There, Sam transformed a 17 acre wooded property into a picturesque estate, spending endless hours meticulously tending to their lawn and flowers. Their marriage ended in 2017 and Sam moved to Heber Springs, AR. to live his remaining years spending time with his two sons.

Sharp witted and debonair, Sam did everything with flair and panache. Sam enjoyed fine wine, exquisite dining, good cigars, fast cars and travelling to exotic locations. From deep sea diving in the Caribbean to mountain climbing in the Tetons he lived life to the fullest. Sam definitely had a life-long love affair with sports cars, having owned Thunderbirds, Corvettes and Mercedes. He often reminisced about the thrill of driving through Monument Valley, Utah at over 200 mph in his 1969 customized, canary yellow, Italian made Iso Grifo.

Sam was an avid fan of the Penn State Nittany Lions and the Pittsburg Steelers. He left this earth wearing a Steelers T-Shirt and bled Black & Gold!

A private service was held on Sunday, Nov. 14 in Rose Bud at the Rose of Sharon Ranch Cemetery.