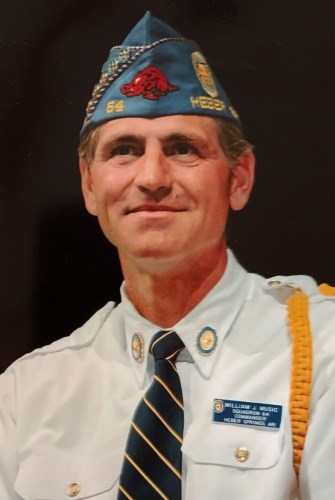 William James Music, 63, of Heber Springs, AR went to be with his Lord and Savior on March 10th, 2021. He was born on July 15th, 1957 in Chicago, IL to Kathleen Louise Music and William Donald Music.

Bill had many adventures and opportunities during his life, from being in a band, to being a Carpenter, Beautician, Salesmen, Roofer, Logistics coordinator for L.A. Shipyards, Construction worker, stay at home dad, and the Sons of The American Legion Commander of the Detachment of Arkansas for 5 years and Sons of the American Legion Squadron Commander of Post #64 for 3 years. Bill had a passion for music and was incredibly creative in his cooking, but his favorite hobby was to fish, especially in his favorite place, Crystal Falls, MI. He accomplished his life dream by building his family a cabin up there along his favorite river. Most of all, he loved his wife, his girls and cherished his time with his grandkids.