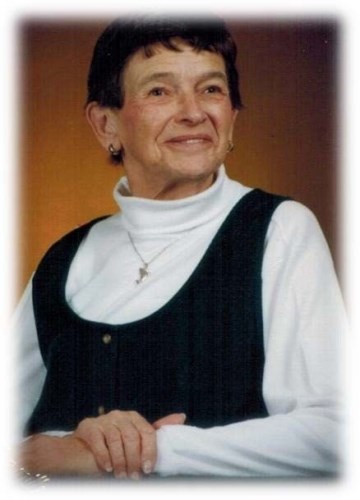 Wilma Alberta (nee Hillers) Simmons was born on November 10, 1927, in Chester, South Dakota, to William Albert and Emma Rose (nee Gienapp) Hillers. Wilma was the fourth of six children consisting of five girls and the youngest, a son. It is noted in the family history that "thinking a son would never arrive, her parents called her Wilma Alberta after her father."

They moved to Sioux Falls, South Dakota, in 1937. In 1945 Wilma went to Davenport, Iowa, to take nurse's training at St. Luke's Hospital. She married Richard Eugene Simmons on December 22, 1947. Their marriage of 51 years was blessed with six children: John (Ferrin), Steve (Colleen), William (Gail), Lynn (Ron) Drummond, Robert (Dawn), and Bruce (Debbie). They have 14 grandchildren (Joseph+), and 16 great-grandchildren to date.

After several moves early in their marriage, Wilma and Dick settled in Moline, Illinois, in 1957, where they became charter members of Holy Cross Lutheran Church. They lived in Moline until they retired in 1989 and moved to Fairfield Bay, Arkansas, where they joined Faith Lutheran Church. Dick died in January, 1999. Wilma continued living in their home until spring, 2018, when health issues necessitated that she move to Indian Rock Village Retirement Community in Fairfield Bay.

During life, in addition to a career in nursing, Wilma was active in many ways. She had a pioneering spirit and enjoyed camping, rehabbing her Austin Healey car, traveling the world over, and gathering her family for reunions all around the country. She loved basket making, spinning wool, quilting, lace making, playing the piano, knitting, soap making, woodworking, bread making, and all things sewing. She maintained lovely gardens, was an accomplished large-order cook (eight hungry mouths to feed for many years!), was active in numerous activities at church and in the local craft store, and was an avid reader.

Faithful in worship and generous in spirit, she was, in the words of Proverbs, "a wife of noble character. She watches over the affairs of her household and does not eat the bread of idleness. Her children arise and call her blessed; her husband also, and he praises her. A woman who fears the Lord is to be praised."

Wilma passed from this life on Thursday, October 7, 2021, full of grace and the love of her Savior Jesus. A memorial service will be held at Faith Lutheran Church in Fairfield Bay on Friday, October 22. Visitation will be at 9 a.m., service at 10 a.m. followed by interment of her ashes at Woodlawn Memorial Park. A luncheon will be served at the church afterwards. Memorials may be directed to Faith Lutheran Church at 310 Snead Drive Fairfield Bay, AR 72088, or to Concordia Seminary, Adopt-A-Student Fund, 801 Seminary Place, St. Louis, MO 63105.