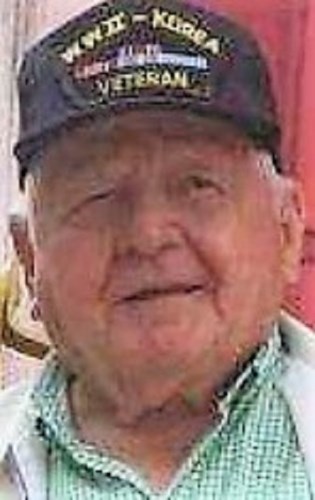 He was a native of Branchville and a graduate of the Branchville school system where he played football and baseball. He was born June 4, 1925, to C. Morgan and Pearl Berry Norris. He married to the love of his life, Hazel Cain Norris. They had three children, John Jr. (Pamela), Christine (Dan) Redding and Charlene (Tony) Negron. He is survived by five grandchildren, Alex Norris, Danny (Melanie) Redding, David Redding, Becky (Charles) Justice and Mike (Brooke) Coble. He is also survived by seven great-grandchildren, Coleman Skeen, Aubrey Skeen, Kylie Skeen, Campbell Justice, Georgia Coble, Colt Coble and Daisy Coble.

He was a veteran of World War II and the Korean War. He was proud and honored to serve his country and loved going to the schools to answer questions the children had about these wars.

After the war, he began working for the Southern Railroad, now Norfolk Southern Corporation. After working for 45 years at the railroad, he and his wife moved to Branchville where he became involved in the town council, member of the Tri-County Chamber of Commerce, S.C. Heritage Corridor, and his most precious joy was being president of the Branchville Railroad Shrine Museum, where he would give tours where Thursday, Friday and Saturday.

He was predeceased by his wife of 62 years, Hazel Norris; his parents; and four brothers, Tommy, Clarence, Clifford and Carl. He is survived by a brother, Mike (Jane) Norris of St. George, and a number of nieces and nephews.

His goal in life was to share his faith in Jesus Christ and to help others who needed a helping hand. There will be a graveside service at 2 p.m. Wednesday, Nov. 18, in Ott Cemetery in Branchville, with the Rev. Tim Shaw officiating.

The family will receive friends at the cemetery one hour before services.

Memorials may be made to the Branchville Railroad Shrine Museum, P.O. Box 73 Branchville, SC 29432.

Online condolences can be made at www.ottfh.com.

To plant trees in memory, please visit our Sympathy Store.
Published by The Times and Democrat on Nov. 17, 2020.
MEMORIAL EVENTS
Nov
18
Graveside service
2:00p.m.
Ott Cemetery
, Branchville, South Carolina
Funeral services provided by:
Ott Funeral Home
GUEST BOOK
3 Entries
"Mr. Johnny" was my boss on Norfolk Southern for many years. He was known as a man of integrity, always supported his employees and had a well-developed sense of humor! He will be missed by all that knew him. My prayers go out to his family, whom he spoke of often in those days, including his sweet wife Hazel, who was a grand (and funny) lady in her own rite!! Mr. Johnny joined the "innumerable caravan", as the list of deaths on the ol' Southern Railway were called!!
Dwain Word
Coworker
November 21, 2020
John Jr.
Please accept my sincere condolences on the loss of you Dad. May God be with you and your family in this time of grief.
Richard Easterday
Friend
November 19, 2020
So sad to hear of uncle Johnnie's passing. Surely he's resting in peace with the Lord
Keith Norris
November 17, 2020