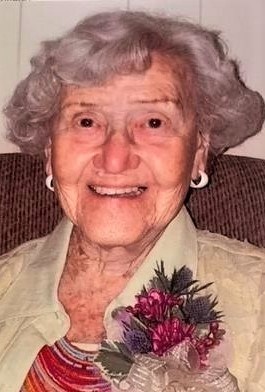 WINNSBORO -- Sarah Trezevant Symmes Boulware, beloved wife of Louis, adored mother of Meg, Barbara and Betsy, and a cherished friend to many, died at her home on Friday, Feb. 19, 2021. She was 102 years young.

Sarah was born on July 31, 1918, to Dr. Thomas Henry and Margaret Wienges Symmes. She grew up in St. Matthews. Upon graduation from high school, she attended Winthrop College for two years and graduated from the University of Georgia in Athens in 1939. She moved to Winnsboro, where she taught biology and physical education at Mt. Zion High School. She also coached the ladies' basketball team and one of her great joys was taking the team to the state championship. It was in Winnsboro where she met Louis Melvin Boulware, whom she married on June 20, 1942, and shared a loving marriage with for 67 years. They raised three daughters, Margaret Anne, Barbara Jean and Elizabeth Seymour.

During the course of their marriage, she lived in many places including Penny Farms, Fla., New Bedford, Mass., and Wyckoff, N.J. In 1964, they were transferred back to Winnsboro, where she lived until her death. Sarah was a very active person and had a wide range of interests, including being a Girl Scout leader for her daughters, an enthusiastic member of her Church Circle at First United Methodist Church, an avid bridge player, and a patron of the Fairfield County Museum, where she was presented the Distinguished Service Award for Museum Patronage in 2016. But her real pleasure was being around people. No one was ever too old or too young to be her friend.

Sports were always a part of her life. She was a lifeguard during her teen years. Sarah learned to play golf at the age of 7 with her father. She scored a coveted hole-in-one and proudly witnessed her son-in-law's ace, and then rushed up to the cup to retrieve his ball. An avid Clemson fan, Sarah and her husband attended many Tiger football, baseball and basketball games. Sarah attended her last Clemson football game at the age of 99. She was known for her extensive purple and orange wardrobe.

Sarah's daughters want to thank Desiray Bibbs, Evelyn Taylor and Connie Trapp, her caregivers, who treated her with compassion, respect and love, and made her last years happy and comfortable. We also want to thank the many kind efforts of the membership and ministry of the First United Methodist Church, especially the caravan for 102nd birthday celebration.

In lieu of flowers, the family requests that donations can be made to First United Methodist Church, 109 West College St., Winnsboro 29180, or the Fairfield County Museum, 231 South Congress Street, Winnsboro, SC 29180.

To plant trees in memory, please visit our Sympathy Store.
Published by The Times and Democrat on Feb. 21, 2021.
MEMORIAL EVENTS
No memorial events are currently scheduled.
To offer your sympathy during this difficult time, you can now have memorial trees planted in a National Forest in memory of your loved one.
Funeral services provided by:
Pope Funeral Home
GUEST BOOK
Sponsored by Pope Funeral Home.
1 Entry
My mother and Sarah were 1st cousins - Jacqueline Wienges Patrick. Sarah was so helpful with Wienges family history while we were putting together several family books. We thoroughly enjoyed several visits to see Sarah. We wanted to take her out to lunch and she would not hear of such a thing! She served us the most wonderful lunches! She was a true delight. I feel blessed to have spent time with her. All my sympathy and love, Jackie
Jackie Davis - Ist cousin once removed
February 22, 2021