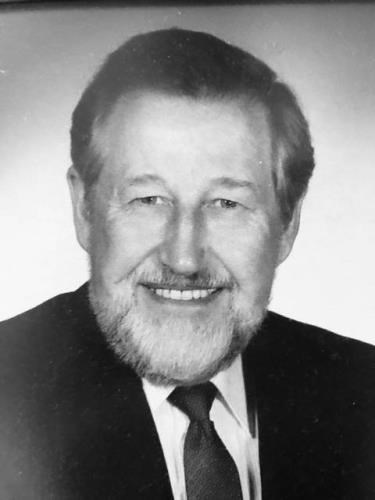 Ken was born in Alton on Feb. 6, 1929, the son of William Michael Walter and Frieda Bachman Walter. He graduated from Alton High School in 1947.

Ken was the first member of his family to graduate from a four-year college, graduating from the University of Illinois in 1952, with bachelor's degrees in both chemistry and biochemical engineering. He later earned a master's degree from Newark College of Engineering.

His expertise in fermentation led to his first job with E.R. Squibb, and a move to New Brunswick, New Jersey. As his career progressed, Ken was heavily in demand for his skill in managing the large-scale manufacture of pharmaceuticals and food ingredients, which led to positions in several leading companies, including Griffith Laboratories in Chicago and Hoffmann La Roche in Belvidere, New Jersey. He ended his career as Vice President of Production with A.L. Pharma in Chicago Heights, Illinois.

As his career meant moving multiple times over the years, he called many places hometown, including Mountain Lakes, New Jersey; Pen Argyl, Pennsylvania; and Crete, Illinois. In retirement, Ken and Elaine chose to live close to some of their children and grandchildren, in Richmond, Virginia; Crown Point, Indiana; and finally, Valparaiso, Indiana.

Ken was very proud of playing clarinet with the famed Marching Illini band in college, including a halftime performance in the 1952 Rose Bowl, and continued to play clarinet at University of Illinois alumni reunions and in community bands well into his eighties.

In retirement, he and Elaine enjoyed travel, especially their trips to Alaska, China, and the Rhøne River Valley. Ken was an avid gardener, both in his own yard and community gardens. He was also very active in service work with the Lions Clubs in Crete, Illinois; Richmond, Virginia; and Lake of the Four Seasons in Crown Point, Indiana.

Ken will be remembered for his love, kindness, and wonderful smile by those who survive him, including his wife, six children, eleven grandchildren, and one great-grandchild; and his sister, Rosemary Walter Evans.

A private memorial ceremony for family and close friends will be held in late September.

Donations in Ken's memory may be sent to Opportunity Enterprises of Valparaiso, Indiana, an organization whose mission is to "maximize self-sufficiency and enrich the quality of life for individuals with disabilities" at https://www.oppent.org/donate.

Published by The Telegraph from Aug. 26 to Aug. 27, 2018.
To plant trees in memory, please visit the Sympathy Store.
MEMORIAL EVENTS
To offer your sympathy during this difficult time, you can now have memorial trees planted in a National Forest in memory of your loved one.
Funeral services provided by:
Dykes Funeral Home, Inc.
MAKE A DONATION
MEMORIES & CONDOLENCES
2 Entries
Dear Elaine and Family,
John and I were sad to hear of our friend Kens passing. He was a wonderful man that loved his family and friends. We witnessed the helping hands that he shared around his community. Always first to step in and help.
Our deepest sympathy to the entire family.
John and Michelle Weidenbach
August 27, 2018
Ken was a great man and we will miss him. We have you in our thoughts.
David Goldman
August 27, 2018
Showing 1 - 2 of 2 results