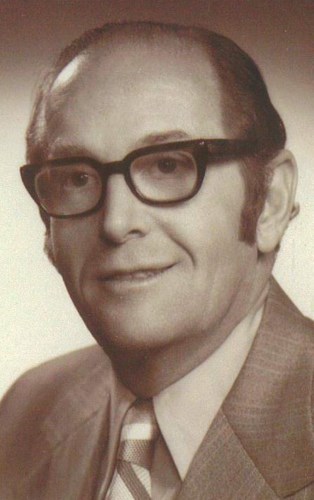 Alfred Reich passed away peacefully the morning of May 20, 2021. Alfred would have turned 96 on June 13 of this year.

Alfred was predeceased by his parents, Louis and Anna Reich of Peckville. Alfred lived on the corner of Main and Brook Streets in Peckville all his life. Alfred graduated from Blakely High School, class of 1943. Alfred served on the committee for school reunions for his high school class and never missed one of the reunions.

After high school, Alfred attended the University of Scranton for one year. On March 4, 1944, Alfred enlisted in the United States Army Signal Corp and achieved the rank of staff sergeant. During the war, Alfred was stationed in Calcutta, India and served on the Burma Road during the end parts of World War II. Alfred was grateful that he never had the experience of live combat. In 1946, after his discharge, he returned to the University of Scranton where he finished his degree in accounting, graduating in 1948.

Alfred worked toward and became a certified public accountant, opening his own practice in the 1960s. Before that, he served as the accountant for Hornbeck Chevrolet, an association he maintained until his retirement in 1993. Alfred was instrumental in helping many small businesses achieve great success. His clients, to this day, speak of him with reverence and deep appreciation. Alfred's integrity, competence and brilliance, coupled with a deep respect for government and the tax laws, made him a great success in his own right. Among his great friends were the late Judge James Munley, the late Attorney Bob Munley, the late Attorney Edwin Utan, the late Ignatz Deutsch, the late Russell Collins, CPA, the late Dr. Walter Bloes, the late Joseph D'Andrea, the Spitz family, the Cutler family, Jim Burns, CPA, Ed Bush, attorney Jerry Weinberger, attorney Bob Kelly, Robert Lettieri and Alan Hornbeck.

Alfred was very proud to serve as secretary and board member of the Peckville National Bank and was instrumental in the mortgage side, allowing many people to purchase their first homes.

In between all of this hard work, Alfred enjoyed trips to the Concord Hotel and Nevele Resort in the Catskill mountains. During the winter months in his later years, he would go to Miami Beach to enjoy the sun.

One of his life highlights was the trip he took to Israel in 2005. His love of Israel and respect for the founders of the country led him to make a memorial there to his parents at the Menachem Begin Heritage Center in Jerusalem. The memorial to Louis and Anna Reich, was the dedication of the Archeological Gardens which took place on Sunday, Nov. 13, 2005. The museum can be found at 6 Nakhon St., Jerusalem.

Alfred was blessed with a close association with Donna Perechinsky for more than 50 years. Alfred's neighbor, the late Helen Cucura, was constantly involved in helping Alfred over the years and taking care of him when he was not well. Friends of Alfred Reich want to thank the staff of Elan Gardens in Clarks Summit and the Jewish Home of Northeastern Pennsylvania for the wonderful care Alfred received over the past years. Alfred's friends would like to give special thanks to Ann Miles of Elan Gardens and to Rabbi Samuel Sandhaus.

Many families in Northeast Pennsylvania were blessed to have Alfred involved in their accounting and business planning. Alfred lived a wonderful life, never spoiling himself with material goods but very quietly sharing all he had to help others. Alfred was a proud member of Beth Shalom Congregation for many years.

Services will be conducted this morning, May 21, at 10:30 a.m. at Beth Shalom Congregation, Clay Avenue at Vine Street in Scranton. Rabbi Yisroel Brotsky and Rabbi Dovid Saks will conduct the services. Interment to follow in the Dalton Jewish Cemetery.

There will be no shiva. Donations should be made to the Jewish Home, Elan Gardens, or the charity of your choice.

To plant trees in memory, please visit our Sympathy Store.
Published by Scranton Times on May 20, 2021.
MEMORIAL EVENTS
May
21
Service
10:30a.m.
Beth Shalom Congregation
Clay Avenue at Vine Street, Scranton, PA
Funeral services provided by:
Carlucci Golden DeSantis Funeral Home
MAKE A DONATION
Please consider a donation as requested by the family.
MEMORIES & CONDOLENCES
Sponsored by Carlucci Golden DeSantis Funeral Home.
1 Entry
Alfred was a Good friend and neighbor of ours for over 77 years. My Mother (Helen Cucura) & Alfred were Neighbors for over 80 plus years. You will be Greatly Missed by everyone who you came in contact with over all these years. REST IN PEACE & GOD BLESS.
Stephen & Jeanne Cucura
Other
May 23, 2021
Showing 1 - 1 of 1 results