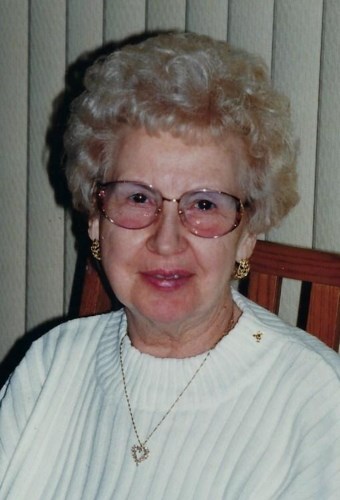 Christel Hunisch, 96, and longtime Taylor resident, died Tuesday at Allied Hospice in Scranton, after an illness. She was preceded in death by her beloved husband of 44 years, Stephen Hunisch, on Aug. 24, 1992.

Born in East Prussia, Germany, on Dec. 11, 1925, daughter of the late Leopold and Bertha Dobrinski Schlatter, Christel was educated in German schools. She moved to Berlin for the conclusion of WWII and began working for US PX where she would meet Stephen. After Stephen's discharge from military service, the couple married and moved to the United States, ultimately settling in Taylor.

A faithful Roman Catholic, she joined the former Immaculate Conception Church in Taylor in 1949 and was an active member until its closure, having served as past president of the Christian Women's Association. She then joined St. John the Baptist Church, Taylor, and was currently a member of Divine Mercy Parish in Scranton where she was a steadfast daily Mass attendee. She was also formerly a member of the Scranton Diocese Council of Catholic Women. Deeply devoted to the Sacred Heart and Blessed Mother, Christel was also a promoter of the Miraculous Medal.

A talented seamstress, she worked as a floor lady for 29 years. Upon retirement, she selflessly served as a volunteer for the Taylor Nursing Home for four years.

She'll never be forgotten by her adoring family and friends.

She is survived by her loving family: three children, Christel J. Vahey and husband, Richard, of Mountain Top; Sandy Petriello, of Moosic; and Stephen Hunisch and wife, Virginia, of Moosic; seven grandchildren; a great-grandchild; and nieces and nephews.

The last surviving of five siblings, she was also preceded in death by brothers, Erich, Horst; and sisters, Gretel and Erika; her son-in-law, Joseph Petriello; and her great-grandson, Andrew Michael Marianelli.

Christel wanted to thank both Dolores and Barbara for all of their kindness and love.

Mass of Christian Burial will be Saturday at 12:30 p.m. at Divine Mercy, 312 Davis St., Scranton, to be celebrated by the Rev. Francis L. Pauselli. Private burial will follow at St. Catherine's Cemetery, Moscow.

Family and friends may pay their respects from 11:30 a.m. until Mass at the church.

Arrangements are under the care of the Thomas P. Kearney Funeral Home Inc., 517 N. Main St., Old Forge. Please visit the funeral home's website for directions or to leave a condolence.