The Rev. George A. Aschenbrenner S.J. 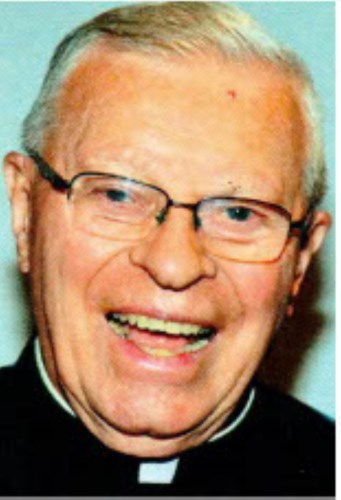 The Rev. George A. Aschenbrenner, S.J., 89, died at Manresa Hall, Merion Station, Pa., on Nov. 27, 2021. Father was preceded in death by his parents, George H. and Gerardine (Otterbein) Aschenbrenner, and brothers, Michael and Henry. He is survived by his brother, Richard (Mary), sister, Kathy Stachula (Jim), sister-in-law, Marcella, devoted nephews, nieces, and his Jesuit brothers.

Father was a well-known spiritual writer and retreat director at the Jesuit Center for Spiritual Growth in Wernersville, Pa., St. Joseph's University in Philadelphia, and at the University of Scranton, where he also served as rector of the Jesuit Community for six years. Additionally, Father served as novice master at the St. Isaac Jogues Novitiate in Wernersville and as director of spiritual formation at the North American College in Rome. In 1995, he cofounded the Institute for Priestly Formation at Creighton University which has since provided programs to more than 3,000 seminarians and 700 priests. In recognition of this, Creighton University recently awarded him an honorary doctorate. Before ordination, Father taught English and Latin at Scranton Preparatory School (1959 to 1962).

Visitation will be held at St. Matthias Church, 128 Bryn Mawr Ave., Bala Cynwyd, PA 19004 on Saturday, Dec. 4 from 9:30 until 10:45 a.m. Funeral Mass will follow at 11 a.m. (masks preferred). Livestreaming available at www.stmatthias.org. Private inurnment at a later date at the Jesuit Cemetery, Wernersville.

Published by Scranton Times from Dec. 1 to Dec. 2, 2021.
To plant trees in memory, please visit the Sympathy Store.
MEMORIAL EVENTS
Dec
4
Visitation
9:30a.m. - 10:45a.m.
St. Matthias Church
128 Bryn Mawr Avenue, Bala Cynwyd, PA
Dec
4
Funeral Mass
11:00a.m.
St. Matthias Church
128 Bryn Mawr Avenue, Bala Cynwyd, PA
Funeral services provided by:
Shelly-Dinan Funeral Home
MAKE A DONATION
MEMORIES & CONDOLENCES
Sponsored by Shelly-Dinan Funeral Home.
4 Entries
Fr George was larger than life while I was an RN on the Brady Wing at Wernersville. He had a ready laugh, and was always so organized. I remember our "dancing" physio up amd down the hall. He always looked forward to his family taking him for holidays, and would come back with stories of the children. May God rest him. Pray for us, Fr George. Úna
Úna
Work
January 7, 2022
George was a great jesuit who made the world a better place. He lived out his commitment to a spiritually principled society. I had the privilege of knowing him as a teacher, coach and friend.
Thomas J Nolan
School
December 3, 2021
As the days and weeks pass, and as you return to life's routine, may you continue to feel comforted by the love and support of family and friends. Please take comfort in the words found at 2nd Thessalonians 2: 16,17.
DT
December 2, 2021
Father Aschenbrenner was at Wernersville the years I attended retreats there. He was a classmate and friend of my brother-in-law´s at St. Joseph´s. We chatted often and I found him to be warm and accepting. God rest him.
Florence Hurley
Other
December 2, 2021
Showing 1 - 4 of 4 results