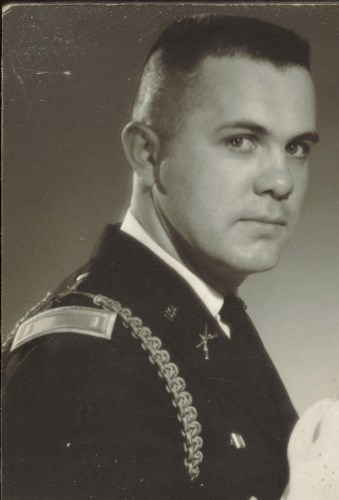 Leonard A. Kresefski Sr., of Covington Twp. and formerly of Old Forge, passed away peacefully on Sunday, Nov. 28, 2021, at the Gino J. Merli Veterans' Center. He was the husband of Grace Pero Kresefski, his high school sweetheart, to whom he was married for 57 years.

Born July 26, 1941, in Taylor, he was the son of the late Bruno and Helen Boheneck Kresefski. He was a 1959 graduate of Old Forge High School, where he was an outstanding athlete on both the football field and basketball court. Len was a driving force behind the Blue Devils winning the 1958 football championship. He was a two-time recipient of the Lackawanna County James "Hookey" Reap Award for Outstanding Lineman of the Year on both offense and defense in 1957 and 1958 (the first two years this award was given). In 1958 he was named to the Big 33 All State Scholastic Football Team.

He went on to play football at the Manlius School and then at the United States Military Academy at West Point, from which he graduated in 1964. He then completed Airborne Ranger training at Fort Benning, Georgia. Then, while stationed in Germany, he achieved the rank of captain and was commandant of the NCO Academy. Leonard then served a tour of duty in Vietnam from 1967 to 1968 as Company Commander 4th Infantry Division. A courageous leader, loved by his men, he was awarded two Bronze Stars (one with the V device for heroism in combat), the National Defense Service Medal, Vietnam Service Medal, Republic of Vietnam Campaign Medal and Vietnam Gallantry Cross with Silver Star.

Upon his return from Vietnam, Leonard's military career was cut short after he suffered a hemorrhagic brain injury, which left him permanently disabled at the age of 27. Strength, courage and sheer determination enabled him to survive this injury and remain a vital member of his family, who loved and admired him to the very end.

An honorable and noble man, faithful to and loving of God, his family and his country, truly an officer and a gentleman, loved and admired by everyone who knew him, forever a hero, he will be greatly missed. He was and always will be a reminder that great things can be accomplished through hard work and perseverance.

In addition to his wife, Leonard is survived by his daughter, Donna Marie Rine (husband, Kelly) of Covington Twp.; his son, Leonard Kresefski Jr. (wife, Susan) of Chester Springs; and grandchildren, Eva and Eric Rine, and Lenny and Hannah Kresefski. He is also survived by sisters-in-law, Jule Kresefski, Donna Farrell and Angela Donati; and many nieces and nephews.

He was also preceded in death by brothers, Joseph, Raymond and John Kresefski; sisters, Jenny Jerry and Celia Luszcz; and his mother-in-law, Jenny Pero, whom he loved dearly.

The family would like to thank all of the staff at the Gino J. Merli Veterans' Center for the compassionate care they provided to Leonard while he resided there.

Private funeral services will be held at the convenience of the family with Mass of Christian Burial in the Parish of St. Eulalia, Roaring Brook Twp., and interment with full military honors in Fairview Memorial Park, Elmhurst Twp.

Published by Scranton Times from Nov. 30 to Dec. 1, 2021.
To plant trees in memory, please visit the Sympathy Store.
MEMORIAL EVENTS
To offer your sympathy during this difficult time, you can now have memorial trees planted in a National Forest in memory of your loved one.
Funeral services provided by:
Ferri & Gillette Funeral Services
MAKE A DONATION
MEMORIES & CONDOLENCES
Sponsored by Ferri & Gillette Funeral Services.
0 Entries
Be the first to post a memory or condolences.