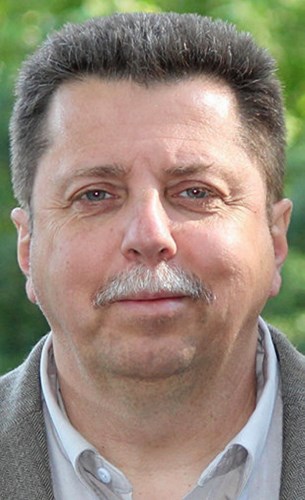 FUNERAL HOME
Jones & Brennan Funeral Home - Forest City
430 Main Street
Forest City, PA
Richard K. Kulasinsky of Vandling died at home after a battle with cancer. His wife is the former Sue Zologa, of Pleasant Mount. Richard entered into eternal rest on May 23, the day of his birth 61 years ago.

Born in Carbondale, son of the late Walter and Eleanor Bailey Kulasinsky, he was a very devoted member of the Christ Episcopal Church, Forest City, where he was a member of the Vestry and an active volunteer. He was a graduate of Forest City Regional High School, class of 1975 and the Williamsport Area Community College, class of 1977 where he received his electrician's certification. Prior to his illness, he was employed as a maintenance technician at Gentex Corp., Simpson, and was previously employed for 31 years at Specialty Records/WEA Manufacturing, Olyphant. A former member of the Vandling Council, having served several terms he was determined to improve the community where he lived his entire life. Richard was proud to be borough council president for the Vandling Borough Centennial celebration, a duty shared by his maternal great-grandfather Roger Bailey at the inception of the Borough 100 years prior. He was especially proud to serve on the Time Capsule Committee, which he saw as a means to share important memories of his town with future generations. Richard could often be seen driving his little red car around town and enjoyed the simple pleasures of life, like watching the birds on his back porch. He was a loving grandfather who adored his grandchildren.

He was also preceded in death by a brother, Edwin Bailey, of Honesdale.

The funeral will be Saturday from the Jones & Brennan Funeral Home, 430 Main St., Forest City, with services at 10 a.m. in Christ Episcopal Church, Delaware Street, Forest City, by the Rev. William Joseph McGinty. Interment will follow in Union Dale Cemetery. Friends may call today, from 3:30 to 7 p.m. at the funeral home.

Memorial donations may be made to Christ Episcopal Church, 700 Delaware St., Forest City, PA 18421. For directions or to send online condolences, visit the funeral home website.
Published by Scranton Times on May 25, 2018.
To plant trees in memory, please visit the Sympathy Store.
MEMORIAL EVENTS
To offer your sympathy during this difficult time, you can now have memorial trees planted in a National Forest in memory of your loved one.
Funeral services provided by:
Jones & Brennan Funeral Home - Forest City
MAKE A DONATION
MEMORIES & CONDOLENCES
38 Entries
my GO-TO-Brother when i needed a little Pick-Me-Up ! We shared everything together , from childhood to his present day here on earth. He will never take a second Place in my memories of him. I loved him and he will always be my Best Friend ever. May he live on in heaven and may light perpetual shine upon him now and for eternity until i meet up with him at my lifes end.
Ronald Kulasinsky
Brother
May 20, 2020
So very sorry for your loss, Rich was a great guy to work with at Gentex Corp. He always had a smile for everyone, and such a smart guy. He will be missed by many.
Charlene Brothers
June 5, 2018
Dear Walt, My heartfelt sympathy on the loss of your Brother. May knowing that you are in the hearts and thoughts of others, give you and your family the comfort and peace during this sad, sorrowful time. May the Lord always shine His Light upon you and all your family
Richard Supko
May 31, 2018
God must have needed an angel! Sue, our deepest condolences on the loss of this beautiful soul. May his memory be eternal. I pray that God will give you and your family strength at this difficult time!
Dina & Peter Wasileski Scordakis
May 30, 2018
Richard always had time for me as a classmate. I will miss him!
Dawn Gibson
Dawn Gibson
May 29, 2018
Sue and family and Walter, a loss too soon...so very sorry. Vandling will also notice the loss.
Condolences,
John and Mary (Simon) Cook
May 29, 2018
as a Brother to Rick, I shall miss him dearly as he also was my BESTEST FRIEND! May Sue find comfort in knowing she was a wonderul wife, along side of him all THE WAY! To his sons, Ricky and Joey, they were his LIFE and strength, also. May GOD bless you all and all of the Kulasinsky family members. May the light of God SHINE in him forever more. Loving Brother , Son in Law , and Uncle. X O
May 28, 2018
Sue, my heart goes out to you and your family. I'm so sorry, I didn't make it to the viewing. I will continue to pray for you. Rest in peace, Rich, your suffering is finally over. Kim Dougherty
May 27, 2018
Sue,Ron,Walterand all the Kulasinsky Family .My sincerest condolences and prayers are with you all at this difficult time. Sincerely, Florence Pipcho.
Florence. Pipcho
May 27, 2018
Ricky and family, we are so sorry for your loss. Many sympathies to you all.
Dwayne and Nancy Manning
May 27, 2018
Sue & family, So very sorry for your loss. Where there is great grief...there was much love. Our thoughts & prayers are with you all.
Ira & Elaine Bandel
May 26, 2018
Our Deepest Sympathy To You And Your Family. Our Prayers And Thoughts Are With You! Uncle Bob, Aunt Dolores Bailey. The Bailey & Tullo families ❤
Doreen Tullo
May 26, 2018
Dear Sue & Family
Remembering how Richard lived, during the first 20 or so years after High School living away from Union Dale, every time I visited, remarkably I had the joy and surprise of always encountering Richard. Mind you this occurred four times over the 20 some odd years in completely chance moments in very brief visits, he always had a smile and brought that rare gem of "carpe deim" in God's blessing to me with a refreshed connection in a friendly spirit of my school years.

I'm glad to have had the opportunity to live these moments with Richard.

Our heart goes out to you and family.

Yours truly,
Mark & Patricia Spencer
Mark & Patricia Spencer
May 26, 2018
Dear Sue and Family, My sincerest sympathy for you at this time. May God bless you and
may Rick Rest In Peace.
Marianne Lewandowski
May 26, 2018
My sincere condolences to Sue and all the family. Rich was a gentle soul and will always be remembered. Till we meet again, Rich.
Peter Kobilsek
May 26, 2018
So sorry about your loss. May God keep you in his loving hands at this difficult time. So sorry we didn't make it to the viewing but you n your family were in our thoughts n prayers. Stay strong ❤
Mary & Tom Yale
May 26, 2018
Sorry to hear of your Husband's Passing...Hunter said a prayer with all his friends tonight and we are sending prayers and thoughts your way
Carrie Reeder
May 25, 2018
So sorry for your loss. Rich was a really great guy. Sending prayers for you and your family.
Terry Volpe
May 25, 2018
Our deepest sympathy to Sue and family. We are so sad to hear this news. May each day bring you a little more comfort. Rick was a wonderful man and is looking over all of you, of that i am certain Xo Laurie, Dave, Emma and Ben DeMark xo
Laurie DeMark
May 25, 2018
So sorry for the Kulasinsky family's loss. God Bless You
Jean Stephens
May 25, 2018
Great memories growing up on Clinton Street in the 50's and 60s!! We had our growing up issues, but he was always kind and interesting to everyone and never complained about our situation. May he rest in peace. John Onufrak
May 25, 2018
Sue/Ron and Walter,
My sincere condolences - will always remember the good times we had as neighbors - whether it was hanging out on the wall or riding our bikes down the Northwest Road.
Ted
Ted Onufrak
May 25, 2018
A kind and friendly former classmate I will miss. Fly high Richard !!
Kandy Davis
May 25, 2018
Sending my sincere condolences to the family and friends, as well as prayers for comfort and strength as you make your way through this loss.
M. Aileen Jackson (Coar)
May 25, 2018
Rick and Katie,
We extend our heartfelt condolences to you and your family. May God's love and the hugs of friends comfort you.
Linda and Des Corey
May 25, 2018
So very sorry for your loss. Keeping all of you in my prayers.
Debbie Bognatz
May 25, 2018
Sue and family,
You are in our continued prayers. Cherish the memories because that can't ever be taken from you. We all love you and will be here for support.
Sending love and prayers,
Krista & Shawn Tully
Krista Tully
May 25, 2018
To Sue and the entire Kulasinsky family, 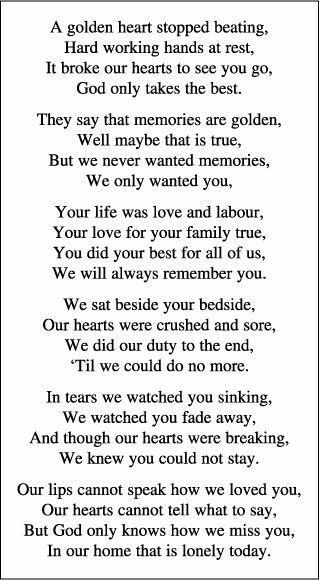 Another kind and considerate former classmate taken from us. Stay strong Sue..cherish your memories.
Charlene McGraw
May 25, 2018
My deepest sympathy to you and your family for your loss. Please know that we are here for you!
Michelle Giles
May 25, 2018
Sharing in your sorrow and offering our deepest sympathy. May time be a source of healing for you and your family.
Joanne, Seth and Holland Durko
May 25, 2018
We are so sorry to hear of Rick's passing. We will truly miss him. He was a great person and will be kissed by many. Hugs, love and prayers to Kulasinsky family.
Kristi, Joe and Olivia Rossi
May 25, 2018
Sue and family, sincere condolences.
Donna Potis
May 25, 2018
So very sorry for your loss.
Linda Gerchman
May 25, 2018
So sorry for your loss.You will be in our thoughts and prayers.
Robert & Donna Lee
May 25, 2018
Sue and family, Please accept our deepest sympathies and prayers. Hold on to the many good memories that you shared. Darlene and family
Darlene Hamlyn
May 25, 2018
There really are no words of comfort at this very difficult time, but know, Sue, that you and your entire family are in the thoughts and prayers of all who knew Rick. His suffering has ended, but his passing has left a tremendous void in your lives. As difficult as it is, please try to focus on the positives and the wonderful memories you have shared over all the years. God bless.
Paul & Cathy
May 25, 2018
My condolences to the entire Kulansinky family.
Gerald Machek
May 25, 2018
Showing 1 - 38 of 38 results