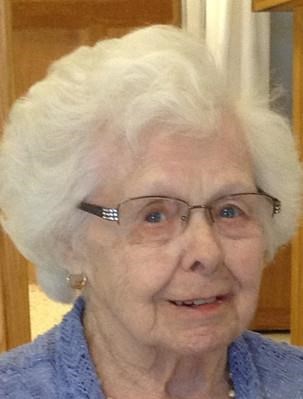 Algonac - Joan Harsen (Ouimet) Stringer, 94, of Algonac, passed away peacefully on October 3, 2018, at Marwood Nursing and Rehab in Port Huron.

Joan was born in Algonac, on January 28, 1924, to the late Maxim and Floyd (Harsen) Ouimet. She married William (Bill) Alexander Stringer, on June 18, 1946, after he returned from World War II.

Joan spent most of her married years as a homemaker and she liked to stay active in the community. She ran the William A. Stringer Little League Field pop stand for many years. She worked at Streitz's Department Store and she also indexed Bibles at Yonaka Bible Index. In her spare time, Joan loved golfing and she bowled for many years for Henry's. She moved to Lewiston after her husband, Bill, retired. During her years in Lewiston, Joan joined the American Legion and spent a lot of time outdoors. She enjoyed golfing at Garland Golf Course. She also loved to spend time snowmobiling and around a campfire with her kids and grandkids.

Memorials may be made to Marwood Nursing and Rehab, Port Huron, Michigan. The family would like to extend sincerest thanks to the kind and caring staff on Draper's Lane for taking good care of Joan.

There will be no memorial service due to Joan's wishes.


Published by The Times Herald on Oct. 14, 2018.
To plant trees in memory, please visit the Sympathy Store.
MEMORIAL EVENTS
To offer your sympathy during this difficult time, you can now have memorial trees planted in a National Forest in memory of your loved one.
Funeral services provided by:
Gilbert Funeral Home Inc
MAKE A DONATION
MEMORIES & CONDOLENCES
Sponsored by Gilbert Funeral Home Inc.
1 Entry
Another of the great Algonac High School class of 1942 has left us!