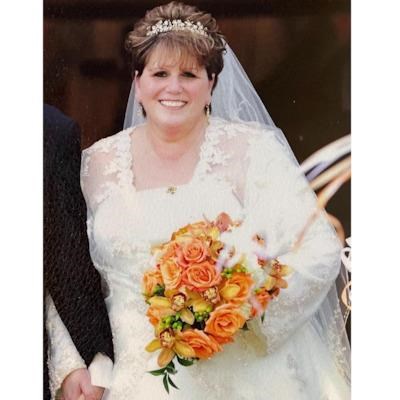 Clearwater, FL - A bright light went out in the world on Friday, June 4, 2021, when MaryJo MacDonald, 62, of Clearwater, Florida, went home to be with the Lord, after a two year battle with lung disease.

She was born MaryJo Molinaro on April 20, 1959, to Joseph and Delores Molinaro, in Port Huron, Michigan. MaryJo grew up in a tight-knit Polish/Italian-American family, the third in a line of four daughters. She spent her childhood and teen years with her sisters - Linda, Kathy, and Lisa - having adventures with extended family on Gillett Street and in Old Farms Subdivision, and taking the occasional trip to Carbondale, Pennsylvania, to visit family and to load up on TastyKakes.

MaryJo attended various Catholic primary schools in Port Huron, and graduated from Port Huron Northern High School in 1977. After leaving Northern, she dedicated her life to working for the family business. MaryJo served as a cook at Little Italy, a bartender at Joseph's Fine Italian Restaurant, and as a bookkeeper for many years at Molinaro Financial Services. Accounting clients will remember her for her exceptional customer service, the overuse of the red "smiley face" stamp, and the habit she had of chewing on the end of her pens.

Ironically, after she had given up on finding romance, she met the love of her life, her champion, her support, and her best friend, Scott MacDonald - when trying to sell a lawnmower online. MaryJo and Scott had a magical first date at the Olive Garden, and knew immediately that they had a special connection. They were married on May 21, 2011, at St. Joseph's Catholic Church in Port Huron, Michigan - one of the happiest days of MaryJo's life. They were brought together by God's grace, and although they were only blessed with ten years as a couple, they crammed a lifetime's worth of unconditional love into that one decade.

Scott and MaryJo both loved Clearwater Beach and all of its beautiful palm trees - so much so that they moved there. Unfortunately, they did not realize how crazy hurricane season could be, so they decided to move back to Michigan into a home that they had designed together. Their retirement dream was to be official Clearwater Snowbirds one day. Even after ten years of marriage, Scott and MaryJo still felt like newlyweds.

MaryJo was an extremely good person. She was down-to-earth, generous, loyal, kind, and loving. She had a huge heart, and was very caring. When she was feeling bad, she would do something nice for someone else, whether it was sending flowers or sending a card to encourage that person. People loved to get one of MaryJo's cards because the envelopes would be covered in colorful stickers, and her messages would be thoughtful and tinged with lighthearted humor. Sometimes, the unsuspecting recipients would even be glitter-bombed with shiny scraps of foil that would end up all over their floors. Always thinking of others, even the four-footed kind, when MaryJo visited people she would often bring along a toy and a treat for their dog or cat, and then happily play with their grateful pets.

MaryJo was fun and full of joy, and she never lost her childlike sense of wonder and whimsy. She was playful, had an infectious giggle, and a conspiratorial twinkle in her eye when she was kidding around. She once bought a red convertible that she drove, listening to the music she loved, experiencing the feeling of the sun on her face and the wind in her hair.

MaryJo was the consummate hostess, and was known among family and friends for her amazing themed parties. Whether it was a Hawaiian luau, a Mexican fiesta, or a Detroit Tiger's baseball extravaganza for her husband's birthday, she made everyone feel special and loved.

She was also an excellent gardener, and grew and tended beautiful flowers. She loved watching the squirrels and wildlife in her yard, and enjoyed spending time on her deck relaxing.

She loved spending time with Scott and with her family. Whether watching "Family Feud" at her parent's house when she was younger ("Good answer! Good answer!"), or an old movie on DVD like "What About Bob?" ("I'm doing the work. I'm baby stepping. I'm not a slacker!"), MaryJo loved good entertainment, a good laugh, and quoting funny lines of dialogue.

Over the years there were many summers and holidays spent with family making minestrone, grispellis, meatballs, squash blossom fritters, and tomato garlic salad. And then eating all of those things, hitting maximum density, and regretting it. (Where are the Tums?)

MaryJo and her sister Kathy loved cruising the back farm roads of Michigan, collecting rocks for their yards; doing marathon shopping trips to Nino's and Papa Joe's; and stopping by Achatz Pies in Armada for dessert. Their special nicknames for each other were "Chickapay" and the "two peas in a pod." MaryJo and her sister Linda spent decades working together at "the office." They loved traveling together, including taking a once in a lifetime girls trip - a Mediterranean cruise, in which they explored Italy and enjoyed the food and culture.

MaryJo's creativity was well known. Whether it was designing a themed evergreen for the Festival of the Trees, making a diaper cake for a baby shower, or creating a unique Halloween costume (like a bunch of grapes), she poured every bit of herself into everything that she did. She was even good at giving people nicknames that stuck, like "Chuckles" and "Misty Girl."

MaryJo was meticulous about her appearance, and always looked put together. She rarely left the house without her hair, makeup, and nails done, and she purposefully matched her clothes and jewelry. She hated it when she was in the hospital and not able to do her own hair. Her signature scent was "Eternity by Calvin Klein," a perfume that would stick with you after you hugged her. For some reason, she sometimes wore her sunglasses inside. In the '80s, before tanning became a known health hazard, she loved to sunbathe around the family pool, using Hawaiian Tropics Oil and tin foil wrapped around a piece of cardboard to amplify the sun's rays. At the time, it was the height of cool.

Although MaryJo never had children of her own, she lavished her love on her nieces and nephew. She was the "cool Aunt" - the one who would let you watch "Pretty Woman" at a sleepover at her house, even though you were probably a little too young to see it. The kind of Aunt who you wouldn't be embarrassed to see "The Thunder Down Under" with in Vegas. The kind of Aunt who would let you eat the maraschino cherries out of the restaurant's bar, and take home the little drink umbrellas for your Barbie dolls. MaryJo would have been a great Mom, but she was an even better Aunt.

MaryJo will be remembered, loved, and missed just as much for her quirks as for her bountiful list of good qualities. She could be stubborn when she was passionate about something. She once had a fight with her brother-in-law entirely by post-it note. She repeatedly bought too much stuff and then tried to get rid of it in garage sales. Her kindergarten teacher wrote in the comments section of her report card that MaryJo was "bossy." (We prefer to think of this as early recognition of her outstanding leadership potential.) But perhaps her worst quality was that she could never fully comprehend how truly beautiful she was inside and out.

One of MaryJo's nicknames was "Bella Cuore," which means "beautiful heart" in Italian. It seems fitting then that her strong and loving heart continued to beat long after she took her last breath. MaryJo was a fighter. She survived three bouts of sepsis (and had three miraculous recoveries), a global COVID-19 pandemic, and overcame many health issues in the latter part of her life. MaryJo knew where her greatest strength came from, and always reminded herself of her favorite scripture in Psalms 46:10: "Be still, and know that I am God." She had dreams and plans that she still wanted to accomplish, but God decided that it was time to bring her home. Undoubtedly, she's up there beautifying heaven with flowers and joking around with the angels.

MaryJo hated funeral homes and visitations and funerals. She especially hated it when people would say that the deceased "looked good" in their casket. "They're dead. They look dead," she would say. She didn't want the last visual memory that she had of a person to be how they looked at the end. Consequently, she wanted to spare her friends and family that experience. At her request, she has been cremated, and her ashes will be scattered in Venice, Italy - a city that held a special place in her heart. A Celebration of Life will be held in Michigan at a future date that has yet to be determined. Condolences can be sent to the family at the website for Brewer & Sons Funeral Home in Dunedin, Florida.

If you would like to honor MaryJo's memory, please live a life of giving to others, pursue your passions, and love ferociously. If you want to give money, the family is looking for donations to offset the cost of this crazy-long obituary (wink, wink). Seriously though, donations can be made in MaryJo's honor to her favorite charity, the Blue Water Area Humane Society, 6266 Lapeer Road, Clyde, Michigan 48049.

MaryJo made her story a good one. She touched many lives, and her memory and the legacy of her love will endure.


To plant trees in memory, please visit our Sympathy Store.
Published by The Times Herald from Jun. 15 to Jun. 20, 2021.
MEMORIAL EVENTS
No memorial events are currently scheduled.
To offer your sympathy during this difficult time, you can now have memorial trees planted in a National Forest in memory of your loved one.
MAKE A DONATION
MEMORIES & CONDOLENCES
1 Entry
MaryJo was a beautiful, vivacious lady. She and Scott were a perfect match. We will remember her smile and she and Scott’s partiesfamily, fun, laughter, conversation and delicious food. We shall miss her beautiful smile. Our deepest sympathies to Scott and families.
Jack & Jo Ann Wilton
Friend
June 18, 2021
Showing 1 - 1 of 1 results