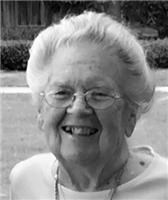 She was preceded in death by her husband of 48 years, Samuel Sidney Webb on December 28, 1996. Mr. Webb was formerly of Alamance and Ashe counties, NC.

Born on Saturday, July 18, 1925, in Crossville, Alabama, she was the daughter of the late Reverend Ernest Edwin and Elsie Jeanette (Ballenger) Haines.

Jackie graduated high school at the age of 16 and attended Piedmont College in Demorest, Georgia, where she attained a Bachelors of Science degree in chemistry and biology. She also attended summer sessions at University of Georgia in Athens and Emory University in Atlanta. She worked as a chemist in Atlanta where she met her future husband, (Sam) Sid Webb. They were married April 10, 1948 and moved to Elon College (now Elon), NC where they began their family. Jackie put aside her professional career to raise her five children, but they often teased that she used her chemistry background to perform experiments in the kitchen at mealtime.

After the children were grown, Jackie and Sid moved to Laurel Springs, NC where Jackie became very involved in the community. She was active in the local homemakers club, taught basket weaving classes at the community college, served as an officer of the Peak Creek Ruritan Club, and was very active at her church, Transou United Methodist Church, where she became a lay leader and occasionally preached.

In addition to her husband, Jackie was preceded in death by three siblings, Mary Ruth Pitts, Jean Fowler, Jo Massey; and four brothers-in-law, Dub Hurst, Hoyt Fowler, Jack Massey and Bobby Brown.
The family would like to thank the staff at Mebane Ridge Assisted Living in Mebane, NC for their loving care of Jackie this past year, as well as the residents who befriended her and made her feel part of the community.

In addition, thanks are extended to the staff at Alamance Regional Medical Center and Alamance-Caswell Hospice Home for the compassionate care they offered in her final days.
Jackie will lie in state at Transou United Methodist Church at 8458 NC Highway 88 East in Laurel Springs, NC from 1:30 p.m. - 2 p.m. on Saturday, January 28, 2017.

Funeral services will begin at 2 p.m. followed by a brief graveside service in the church cemetery. Jackie's family will receive friends and family at the Peak Creek Ruritan Community Center at 7062 Highway 88 East in Laurel Springs following the graveside service.

You may give the family your condolences at our website www.boonefuneralhome.com.

Boone Family Funeral Home of West Jefferson is in charge of these arrangements.
To plant trees in memory, please visit our Sympathy Store.
Published by TheTimesNews.com from Jan. 28 to Jan. 30, 2017.
MEMORIAL EVENTS
No memorial events are currently scheduled.
To offer your sympathy during this difficult time, you can now have memorial trees planted in a National Forest in memory of your loved one.
Funeral services provided by:
Boone Family Funeral Home Inc
MAKE A DONATION
Please consider a donation as requested by the family.
MEMORIES & CONDOLENCES
0 Entries
Be the first to post a memory or condolences.