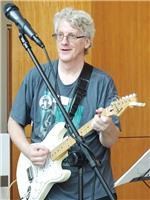 Daniel Scott Smolla, 54, of Aurora, left his earthly body and his cancer battle behind when he passed away in the early morning hours September 20, at the home of his brother in Wilmington, Delaware.
Dan, adult programming librarian for the Richard and Gina Santori Public Library of Aurora, was the mastermind behind some of the library's most intriguing programs, including the Paranormal Discussion Group; an improv comedy group called "First and Thirds, Absurds and Nerds"; "Walking in this World: The Practical Art of Creativity"; "Dylan Day"; "Stories and Songs of the Civil Rights Movement," featuring Dr. Ernest E. Gibson, a personal friend of Martin Luther King, Jr.; "Shakespeare Mini Fest," a commemoration of the Bard 400 years after his passing; and "The Fox: Aurora's Environmentalist Superhero."
Dan was a filmmaker, songwriter, and singer/guitar player for many bands throughout the years including The Bald Willies, the Spuggs, Into the Real and Brother Chi and the Alchemists (to name a few).
A close friend wrote: "There was definitely something both deeply accepting and frustratingly intangible about (Dan). Funny as hell. A genuinely original mind."
Family and friends will gather for a celebration of Dan's Life at 5:30 p.m. Saturday, Nov. 3 in the atrium of the Richard and Gina Santori Public Library of Aurora, 101 S. River Street.
Dan is survived by three brothers and one sister; Rod (Anna), Carol (Tom), Greg (Ada) and Jeff (Jessica) and a number of nieces and nephews. He was preceded in death by his parents, Richard and Harriet Smolla.
He is survived by library colleagues, former classmates and bandmates, friends from The Theosophical Society in Wheaton, actors and actresses with whom he worked, and caregivers who gave him emotional, spiritual, and practical help during the last year of his life.
From the song "Tide," by Dan Smolla: Right or wrong at least you tried the mind is long and the mind is wide and nothing lasts forever in the land of time and looking for the signal is itself a sign and for a while I walked without a light circled left then circled right but now I hear the water and the bridge is in sight. I'm gonna cross the river-- listen-- hear my feet as they chime.
To plant trees in memory, please visit our Sympathy Store.
Published by The Voice from Oct. 19 to Oct. 20, 2018.
MEMORIAL EVENTS
Nov
3
Celebration of Life
5:30p.m.
Richard and Gina Santori Public Library of Aurora atrium
101 S. River Street, Aurora, IL
MAKE A DONATION
MEMORIES & CONDOLENCES
2 Entries
When someone you love becomes a memory, the memory becomes a treasure. May the wonderful treasures fill your hearts with love and bring you peace. Our thoughts and prayers are with you during this difficult time. 1 Thessalonians 4:13-14.
BB
January 28, 2019
Our sincere condolences to the Smolla family in the loss of your dear love one. Our prayers are as yours, that God provide his care and comfort you each day.
- Psalms 145:18,19
Your neighbor..
October 20, 2018
Showing 1 - 2 of 2 results