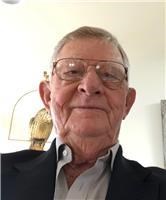 FUNERAL HOME
Buckler-Johnston Funeral Home
121 Main St.
Westerly, RI
Born in Greensburg, Indiana (the town with a tree growing out of the courthouse tower), Dale was no stranger to good hard, honest farm life and enjoyed trapping, hunting, and fishing as well.
He married his high school sweetheart Marjorie "Tootsie" Barrett on February 17, 1952, and raised their children Michael, Dala, and Tracy. Marjorie and Dale enjoyed 58 years together until she passed away in 2010.
In 1954 the Army decided that they wanted Dale to join them for a time by presenting him a friendly Draft Notice. Once in and through basic training, they thought his talents would be best used on Tanks. He disagreed, deciding instead to become an officer by going through Officers Candidate School. He began his official career in aviation, starting in Fixed Wings and then moving onto Helicopters which became his true aviation passion. Along the way, he received his Bachelor of Science Degree from Benedictine College in Atchison, Kansas. Twenty-two plus years later, he retired from the Army and began his second career as a Helicopter Pilot with Air Logistics.
Travel was a passion for Dale; while the Army sent him to Korea and Vietnam, he also enjoyed numerous other locations throughout the United States and an exciting move to Cairo, Egypt, where he taught local Egyptians how to fly Helicopters with Air Logistics.
Dale remarried in 2011 to long-time close friend Gloria "Judi" Wuerch and the two have thoroughly enjoyed others' love and company until his passing. It has been so wonderful to see the happiness that they brought each other.
Dale is survived by his wife Judi, his three children Michael, Dala, Tracy, and his stepchild Samantha and numerous grandchildren.
Dale will forever be remembered by all of those who loved him, as a remarkable human being with a great capacity of love for his family, along with his generosity, his compassion and support, and for the many great joys he brought to the people he came in contact with. Lastly, (and perhaps most importantly), Dale's love of food and cooking ability will be cherished and missed.
A private memorial service will be held in the future.
In accordance with Dale's love of service and giving to others, the family requests that in lieu of flowers, donations be made to the South County Home Health Care in Wakefield, Rhode Island.
For online condolences, please visit www.buckler-johnston.com
Published by The Westerly Sun on Nov. 16, 2021.
To plant trees in memory, please visit the Sympathy Store.
MEMORIAL EVENTS
To offer your sympathy during this difficult time, you can now have memorial trees planted in a National Forest in memory of your loved one.
Funeral services provided by:
Buckler-Johnston Funeral Home
MAKE A DONATION
MEMORIES & CONDOLENCES
Sponsored by Buckler-Johnston Funeral Home.
0 Entries
Be the first to post a memory or condolences.