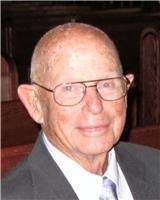 BORN
1925
DIED
2019
FUNERAL HOME
Avery-Storti Funeral Home - Wakefield
88 Columbia Street
Wakefield, RI
Dr. Rodger B. Dowdell, 94, formerly of East Greenwich and Narragansett, RI, passed away peacefully on Thursday, July 4th, 2019 at his summer home in Rehoboth, Ma. with his wife, Colette Salpietro, by his side. He was born in Portsmouth, NH on March 18th 1925. He was the son of the late Ralph Everett and Alice Birtwell Dowdell. He was also predeceased by his first wife Mary Parker Dowdell, (with whom he shared 8 children) daughter Lynda Alice Tougas and granddaughter Haley Margaret Dowdell.
Growing up in Cumberland Rhode Island, he joined the Navy during World War II and graduated from Yale University after 3 years of study with a Bachelor of Science in Mechanical Engineering and Applied Mechanics. He served in the Navy immediately following the war on the USS Randall stationed in the Pacific.
He earned a Masters of Science in Mechanical Engineering from Brown University in 1952 and became a Professional Engineer. He worked in industry for both BIF and General Electric, then became an Associate Professor of Mechanical Engineering at the University of Bridgeport, Ct. While teaching there, he received a Fellowship to Colorado State University where he earned a Ph.D in Mechanical Engineering in 1966. Upon his return to Rhode Island, he became a full professor at the University of Rhode Island until his retirement in 1989.
He was considered an expert in fluid dynamics and flow measurement. He served as President of the American Society of Mechanical Engineers and also served on the International Committee for Flow Measurement Standards. He represented ASME and the United States in what is now St. Petersburg, Russia in 1971 and attended many worldwide conferences on the issue of flow measurement. His work in fluid dynamics is widely cited.
Following retirement from URI and as an accomplished seaman, he sailed his beloved sailboat "Transition" from Narragansett, RI to Southwest Florida where he lived in Punta Gorda Isles and then Lake Suzy until his passing.
He loved the game of golf and was a longtime member of Point Judith Country Club, Narragansett, Crestwood Country Club in Rehoboth, Ma. and Kingsway Country Club in Lake Suzy, Florida. He belonged to the Smelt Brook Yacht Club, and made many happy memories with his family and friends. Sailing adventures to the Maine coast, Cape Cod and the Islands, along with Narragansett Bay and Block Island brought him much pleasure. He loved to travel, read a good book and watch Law and Order.
He is survived by 7 children, Mary Dianne Owen, Rodger B. Dowdell, Jr. (Linda), William D. Dowdell, P.E.(Cheryl), David A. Dowdell, Steven P. Dowdell (Kathy), Margaret D. Toth (Jim) and Deborah D. Perry (Scott) and two step-children, Lisa Pacheco (Bob), and Joseph Salpietro (Jennifer), along with 26 grandchildren, 5 step-grandchildren and 29 great-grandchildren.
Funeral services will be held at the Avery-Storti Funeral Home, 88 Columbia Street, Wakefield, RI 02879, at 10 a.m. on Saturday July 13th 2019. Calling hours are on Friday, July 12th from 4 to 7p.m.
In lieu of flowers, donations may be made to the Cystic Fibrosis Foundation, www.cff.org, For information please visit: www.averystortifuneralhome.com
Published by The Westerly Sun from Jul. 9 to Jul. 10, 2019.
To plant trees in memory, please visit the Sympathy Store.
MEMORIAL EVENTS
Jul
12
Calling hours
4:00p.m. - 7:00p.m.
RI
Jul
13
Funeral service
10:00a.m.
Avery-Storti Funeral Home - Wakefield
88 Columbia Street, Wakefield, RI
Funeral services provided by:
Avery-Storti Funeral Home - Wakefield
MAKE A DONATION
MEMORIES & CONDOLENCES
Sponsored by Avery-Storti Funeral Home - Wakefield.
5 Entries
fred galati
October 29, 2019
Dear Colette and family - Please accept our deepest sympathy on Rodger's passing. We'll always remember his bright smiles, his positive outlook on life and his love for golf regardless of weather conditions. May he Rest In Peace and May God Bless his soul and your awesome family. Sincerely, Al and Diana Radcliffe, Lake Suzy FL.
Diana & Al Radcliffe
July 12, 2019
Smart, kind, patient and a great sense of humor. You will be missed more than you know. R.I.P. dear Rodger.
Our deepest sympathy to you Colette and your families
Martha & Jerry Colagiovanni
July 10, 2019
Mr Dowdell (he was always Mr. Dowdell to me since I knew him when I was in high school) was a good kind especially patient man. I remember being in his car with his son Dave and someone else, I can't recall. The three kids were arguing about whether you could travel at negative speed (really, I know it sounds stupid). I asked Mr. Dowdell what he thought. He didn't say a word. He just smiled just like in this picture and kept driving.
My deepest condolences to the family and friends.
Joe Lawrence
July 9, 2019
Growing up in East Greenwich 50 years ago, the town had a handful of real scientists. Dr. Dowdell was one of them. My condolences to his family and friends.
Mark Thompson
July 9, 2019
Showing 1 - 5 of 5 results