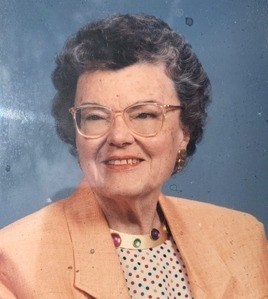 She was a member of St. James's Episcopal Church, where she served as a member and chair of the altar guild, and a member of the Country Club of Virginia; The Woman's Club; the Valentine Museum, where she served as a volunteer; the Virginia Museum of Fine Arts; and the Virginia Historical Society. She was a 1937 graduate of Thomas Jefferson High School and graduated with an A.B. degree from Randolph-Macon Woman's College (now Randolph College) in 1941. She was a loyal supporter and actively involved for many years in local and national alumnae affairs of RMWC, and she served as Secretary of the National Alumnae Board and as Alumnae Advisor to the Board of Visitors.

She began her professional career as secretary to the Dean of Medicine at the Medical College of Virginia and after a number of years in that position, in 1960 she became the secretary for the State Health Commissioner. In 1976, she became the Legislative Liaison and administrative assistant to the Commissioner, and in that capacity she was assigned in 1977 to work with both the Attorney General's office and the Virginia Code Commission to rectify all the state's health laws, principally title 32 of the Code of Virginia. This effort culminated in the enactment of title 32.1 by the 1979 General Assembly, and she played a key role in monitoring and assisting in the various hearings related to the passage of that legislation. Subsequently, the Code Commission asked for her assistance in the rectification of title 35 of the Code of Virginia, the laws dealing with the regulation of restaurants and hotels. That resulted in the successful enactment of title 35.1. She retired from the Health Department in 1982 and subsequently served as a legislative aide to two senators in the General Assembly in the 1983, 1984, 1988 and 1989 sessions.

While she was widely respected for her professional contributions and her volunteer work, family always came first for her. She was deeply loved by her family and her many friends, who give thanks that her memory will endure despite the long years of dementia at the end of her life and who rejoice that she is now and forevermore at peace. For us, she epitomized the life more abundant.

There will be a graveside service at 1 p.m. on Friday, May 14, 2021 at Forest Lawn Cemetery, 4000 Pilots Ln., Henrico, Va. In lieu of flowers, the family requests that donations be made to Randolph College, the Alzheimer's Association, St. James's Episcopal Church or a charity of your choice.
To plant trees in memory, please visit our Sympathy Store.
Published by Richmond Times-Dispatch from May 11 to May 12, 2021.
MEMORIAL EVENTS
May
14
Graveside service
1:00p.m.
Forest Lawn Cemetery
4000 Pilots Ln, Henrico, Virginia
Funeral services provided by:
Bliley's Funeral Homes Central Chapel
MAKE A DONATION
Please consider a donation as requested by the family.
MEMORIES & CONDOLENCES
Sponsored by Bliley's Funeral Homes Central Chapel.
0 Entries
Be the first to post a memory or condolences.