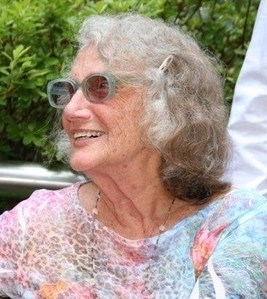 Alice grew up on the family farm in Ellicott City, Maryland. She went to school at Notre Dame Preparatory School and swam daily at the Meadowbrook Pool. She spent her summers at Happy Valley Camp in Port Deposit, Maryland, where she helped raise the Dalmatians and loved horseback riding.

She completed the Nursing Program at Notre Dame and worked at Union Memorial Hospital in Baltimore. In her words, these were the best days of her life, making a difference in peoples' lives. She also worked at Johns Hopkins Hospital and the Army Nurse Corps.

Alice married Jaquelin Marshall Harrison in 1947 and raised four children, all while clearing land at the James River, raising Bassett Hounds and Doberman Pinschers, coaching champion swimmers and swim teams and even teaching the mentally challenged to swim. In so many ways, she continued to make a difference!

As time passed, Alice spent more time in pursuit of truth and justice for the down-trodden. She read a great deal and even traveled to Egypt. Her interest in religion and symbolism were strong motivations for the rest of her life.

The family will be planning a private ceremony at a later date. In lieu of flowers, the family requests that donations be made to the Shriners Hospitals for Children, ATTN: Processing Center, P.O. Box 947765, Atlanta, Ga. 30394.
Published by Richmond Times-Dispatch on Nov. 7, 2021.
To plant trees in memory, please visit the Sympathy Store.
MEMORIAL EVENTS
To offer your sympathy during this difficult time, you can now have memorial trees planted in a National Forest in memory of your loved one.
Funeral services provided by:
Allen & Shaw Funeral Home
MAKE A DONATION
Please consider a donation as requested by the family.
MEMORIES & CONDOLENCES
Sponsored by Allen & Shaw Funeral Home.
1 Entry
So sorry for your loss Randy. Your mother sounds like a wonderful lady. I was always impressed by how you kept in touch with her.
Barbara Rose
Other
November 9, 2021
Showing 1 - 1 of 1 results