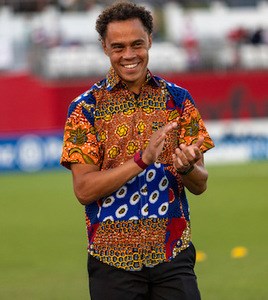 BORN
1980
DIED
2021
BULOW, David A., On May 6, 2021, at the age of 41, David Adam Bulow -- adoring and adored father, devoted and loving husband, revered son and brother, beloved friend, consummate teammate, brilliant athlete, cherished coach, kindhearted human, life of the party -- succumbed to a stroke he had suffered the week prior. In his wake, Dave leaves seismic devastation, felt most acutely by his wife, Nellie Stisser Bulow and their three young children, Aaron, Cameron and Lucy.

Dave's most ardent fans serenaded him at each game with the simplest five word chant: "There's Only One David Bulow." Anyone who knew Dave would certainly agree with that sentiment. Discipline, soulfulness, humor and alacrity were Dave's trademarks and the depths of his influence are profound. Whether you were his carpool buddy or teammate, his choir partner or lab partner, his coach or player, Dave made you feel like a lifelong best friend; perhaps he once provided you with a jubilant back slap or leapt whimsically into your unsuspecting arms.

Dave was born on February 4, 1980, in Denver, Colorado, where he grew up with his sister, Sarah and his adoring parents, Aaron and Judy Bulow. Even in kindergarten, Dave's infectious, freckle-faced laugh and electric personality radiated warmth, and many friends credit him with making them better through the strength of his example. As Dave progressed through school, his allure only intensified and as Head Boy of Denver East's class of 1998, he was described as "an angel who tickles your funny bone." As an innately gifted athlete (and handsome devil!), no one would have blamed Dave had he adopted a big-man-on-campus persona. And yet, he remained deeply humble and enchantingly accessible, qualities that never aged.

Following high school, Dave matriculated to Bowdoin College, where he became renowned for his dynamic disposition, intellectual prowess, raucous vocal renditions of 90s rap and, of course, his majesty on the soccer pitch. Indeed, Dave wore shorts under every pair of pants, explaining, "you never know when a game of footy might break out." Crowds gathered to revel in his post-goal acrobatics and to gleefully belt, "Walking in a Bulow Wonderland," as Dave achieved All-American accolades and racked up scoring and assist records, which still stand today. Yet, his teammates cite his natural leadership and unadulterated love for the beautiful game as what truly separated him from the pack.

After college, Dave ambitiously pursued soccer as a profession. He played for clubs, including the Cape Cod Crusaders, Limavady United, the New Hampshire Phantoms, the Boulder Rapids and Dungannon Swifts, before ultimately enjoying a celebrated career with the Richmond Kickers. The Red Army always had his back. On the field, teammates passed the ball to Dave not simply because it often found the back of the net by way of his foot or head, but because his passion for the game seemed reciprocal; as if his magnetism applied not just to people, but to objects as well. When Dave's career as a player concluded, he impacted innumerable lives through coaching -- from Academy kids to professionals -- eventually being promoted to Head Coach of the Kickers. Dave's inspirational, intellectual and tactical style fostered tangible development in his players as he simultaneously inculcated them with joy. It was also during his time traveling the country as a player that Dave pursued a relationship with his birth family. Judy supported this wholeheartedly, facilitating a surprise first meeting between Dave and his birth mother, Maryellen Brennan during a game in Denver. For Dave, there was always room for more love and he subsequently forged close bonds with his half-siblings, Shannon and Andrew and Maryellen's husband, Charlie.

Of all of his impressive feats and titles, though, nothing made Dave happier than being a husband and father. After meeting in their native Denver in 2010, he and Nellie married on September 15, 2012. From then on, he relished spending time with his budding family. In wrapping a newborn Lucy around his chest; in teaching Cameron silly jingles; in reveling in the look on Aaron's face as he tasted a lime for the first time; in watching them grow. Dave had a penchant for letting Cameron and Aaron wander into the woods near their house or run ahead to the playground. When they heard the sound of their dad's distinct whistle, the boys echoed him with their voices and boomeranged back to his side; they, along with an Arsenal-kit clad infant Lucy, were ready for their next adventure. Always looking for a silver lining, Dave cherished the time that quarantine afforded him with the kids. Each night at 7 p.m., he rallied his clan -- and, eventually, the neighborhood -- to stand on the porch and clap vigorously, instilling in them that the real superheroes are nurses like their mom. Dave's zest for life, his humility and his unrelenting discipline have been genetically imbued into the core of his and Nellie's children.

As an organ donor, Dave's instinct to think of others before himself gifted a web of families with their miracle in the days following his death. And so, remarkably, David Bulow remains a life force, not just in the spirit of those he touched, but quite literally within people he never even met. In addition to his immediate family, Dave is survived by numerous aunts, uncles, cousins and in-laws; and, of course, countless grief-stricken friends and fans. In lieu of flowers, please donate to the family's GoFundMe page (open until August 2021) or support them via gift cards, meals and helping hands. And, please remember to channel that David Bulow spark each day and treat others with his unabashed kindness.
To plant trees in memory, please visit our Sympathy Store.
Published by Richmond Times-Dispatch on Jul. 20, 2021.
MEMORIAL EVENTS
No memorial events are currently scheduled.
To offer your sympathy during this difficult time, you can now have memorial trees planted in a National Forest in memory of your loved one.
MAKE A DONATION
MEMORIES & CONDOLENCES
0 Entries
Be the first to post a memory or condolences.