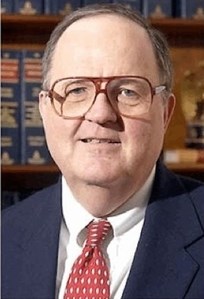 Wayne was born April 2, 1942 in Louisville, Ky. to Francis and Mildred O'Bryan.

Wayne grew up in an average home, but being ambitious, he worked his way through college and law school as a waiter. He was the first in his family to become a lawyer and only the second to get a college education.

After graduating, Wayne went into general practice on his own, where he began representing individuals in DUI and other kinds of cases.

In 1977, Wayne was elected to the House of Delegates, where he served four years on the Courts of Justice committee.

In 2000, Wayne retired from the firm, but quickly discovered that he did not like being retired. He then decided to return to a solo personal injury practice. Many will recall his memorable radio ads affirming him as "A nice guy who wants to make a difference in your life."

He is survived by his son, David Jr.; his daughter-in-law, Kathy; and his two grandchildren, Rose and Charles.

He was preceded in death by his wife, Margaret.

The memorial service will be held at Benedictine School Chapel on September 25 at 11 a.m. and will also be viewable online at reellyfeproductions.com. In lieu of flowers, please make donations to Richmond Audubon Society, P.O. Box 26648, Richmond, Va. 23261.
Published by Richmond Times-Dispatch on Sep. 14, 2021.
To plant trees in memory, please visit the Sympathy Store.
MEMORIAL EVENTS
Sep
25
Memorial service
11:00a.m.
Benedictine School Chapel
VA
MAKE A DONATION
MEMORIES & CONDOLENCES
3 Entries
A fine man and a good friend. He will be greatly missed by those who knew him.
Jerry Owen
September 27, 2021
Rest In Peace, Wayne. Thank you for everything you did for me and fir Audubon.
Pam Dummitt
Friend
September 24, 2021
My condolences to Wayne´s family. He was one of the first lawyers I met in Richmond. I enjoyed working with him as a lawyer and good Democrat. He will be missed. I thought very highly of him. So sorry to learn of his passing.
Larry Framme
Friend
September 14, 2021
Showing 1 - 3 of 3 results