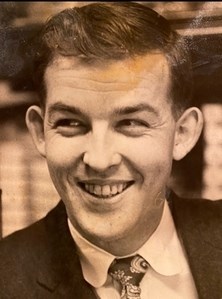 SLATER, Dayton Francis, Sr., On October 31, 2021, Dayton Francis Slater Sr., age 92, of Fort Myers, Florida, formerly of Richmond, Va., slipped peacefully away in his sleep with his family by his side. He was predeceased by his parents, Louis Edgar Slater Sr. and Ruby Lee Tucker Slater; his older sister, Elizabeth Slater Henkle; and his older brother, Winfree Hudson Slater.

Mr. Slater was a graduate of the John Marshall High School class of 1947 in Richmond, Virginia where he served in the Cadet Corp. After graduation he served his country in the Virginia National Guard. He owned and operated several businesses in Richmond during the 1950s and 1960s, including a camera shop on 7th Street and a hobby shop on Westover Hills Boulevard. He served several years as the President of the Richmond Camera Club. He later ended up in real estate with Winfree H. Slater Realtors and eventually forming his own brokerage in Goochland, Va. while running a family horse and cattle farm until his retirement in 1985. He served several terms on the Board of Zoning Appeals for Goochland County and the Board of Directors of the Goochland Volunteer Fire-Rescue Association including a term as President. He also served many years as a Deacon at Mizpah Christian Church, Disciples of Christ in Goochland, Virginia.

Over his work years Dayton enjoyed a number of hobbies including sailing, camping and traveling. All three of these became his retirement as he and Lessie sold the farm and lived full time on their sailboat. For three years they would go north to New England in the summer and south to Florida in the winter. In the winter of 1989 they bought a home in Fort Myers, Fla., where they could tie up the boat to the dock and take off on new adventures crisscrossing the nation in their motorhome.

In 1995 they moved to Shell Point Village Retirement Community where they enjoyed the warmth of Florida and the freedom to travel even more. They took train trips across the western states and one to Alaska. Their proximity to Miami made it easy for them to be on standby for frequent cruises when the ships had cancellations so they would go many times a year. The pinnacle of their time aboard cruise ships was their 120-day cruise around the world.

Dayton was an avid reader and a master chess player. He combined these skills to research and plan all of these trips and adventures along with their moves to enjoy new challenges. He also made the plans which placed them in the best spot for them in their golden years and for their long term care. In those plans he determined that he wanted to celebrate while he lived instead of after death, so in accordance with his wishes there will not be any funeral or memorial services.

The family encourages everyone to live life to the fullest. Go sailing or camping or traveling and see great sights and make great memories. Those are the things that last.

Published by Richmond Times-Dispatch from Nov. 25 to Dec. 2, 2021.
To plant trees in memory, please visit the Sympathy Store.
MEMORIAL EVENTS
To offer your sympathy during this difficult time, you can now have memorial trees planted in a National Forest in memory of your loved one.
MAKE A DONATION
MEMORIES & CONDOLENCES
2 Entries
My sincere sympathies and deepest condolences to the entire family on Smokey's passing. My parents were friends of Smokey and Lessie's and she looked after me one summer during the day when I was about 10, while my parents were at work. I will always remember him as a fascinating and kind man, and can still remember all the remote control airplanes he had and would explain what each of them were to me. As a 10 year old, I was in awe! Hard to believe that was 50 years ago.
Bryan Slater
November 28, 2021
Dayton and Debbie-what a life well lived! I am so sorry for your loss and trust that this treasure trove of great memories will make your days ahead as peaceful as possible. I know you will miss him deeply and I send so much sympathy your way.
Ellen Barnard Vance
November 25, 2021
Showing 1 - 2 of 2 results