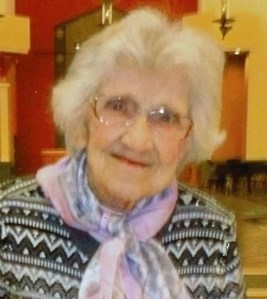 BORN
December 11, 1914
DIED
February 24, 2021
STONITSCH, Josephine T., died peacefully in her sleep on February 24, 2021. She was born December 11, 1914 in Chicago Heights, Ill. to Joseph Anthony Smith and Clara Alice Masters. She was married to the late Harold John Stonitsch. Jo grew up in Chicago Heights with her eight siblings, and recently she triumphantly declared that she was "the last of the Mohicans," having outlived all her siblings. Her life was centered around her love for her family and her dedication to her Catholic faith. She was a member of St. Mary's Catholic Church in Richmond, Va. and a resident of Henrico County for the past 11 years. Prior to that, she lived in Crystal River, Fla. and was a founding member of St. Scholastica Parish in Lecanto, Fla., a school aide at St. John Paul II Catholic School also in Lecanto and a member of The Benedictine Oblates. When she lived in Orlando, Fla., she was the secretary of Good Shepherd Parish and taught religion there for 18 years. It was there in Orlando where Jo and Harold raised five children, the late Harold William Stonitsch, Mary Jo Zkiab, Joseph James Stonitsch, Clenise White and Rita Lepinskie. She is survived by seven grandchildren and 20 great-grandchildren, and was predeceased by one grandchild. Jo was a veteran of World War II and served as one of the first WAACS who enlisted from the Chicago Heights area. She was in the Women's Army Corps for three and a half years and rose to the rank of Sergeant. Jo was looked upon as a mother to many besides her own children. Many adopted her as their mother wherever she lived, and she was called Mom, Mama Jo, Mom #3, Momma Stonitsch and many other endearing names. She often said: "I preach love" and that was certainly true. She was known for her quick wit and sometimes blunt honesty which made her even more lovable.

She loved to work crosswords puzzles throughout her entire life, and even won a competition run by the newspaper in Chicago Heights as a youngster. Besides family and friends, others who didn't even know her would save up crossword puzzles to mail to her, and she kept up with writing to family and friends on a weekly basis throughout her lifetime. She learned how to text on her iPhone in recent years and spent time communicating daily with her children on her GrandPad, determined to use emojis as often as possible! Writing, crocheting, reading and praying were her longtime companions, as was watching daily Mass in her later years. She was a constant and loyal friend to her family and to so many others who saw her as a truly remarkable 106 year old.

In lieu of flowers, donations can be made to her parish, St. Mary's Catholic Church (Human Concerns & Social Justice Ministry), 9505 Gayton Rd., Richmond, Va. 23229 or to a charity of your choice. Chas E. Davis Funeral Home with Crematory, Inverness, Fla., in charge of Florida arrangements.
To plant trees in memory, please visit our Sympathy Store.
Published by Richmond Times-Dispatch on Mar. 2, 2021.
MEMORIAL EVENTS
Mar
9
Mass of Christian Burial
11:00a.m.
St. Scholastica Catholic Church
Funeral services provided by:
Chas E. Davis Funeral Home
MAKE A DONATION
Please consider a donation as requested by the family.
GUEST BOOK
Sponsored by Chas E. Davis Funeral Home.
7 Entries
We send our deepest condolences for the passing of. Mrs. Josephine Therese Stonitsch. "Those whom we love we can never lose, they become part of us."
Joe & Mary Doner
March 9, 2021
What an amazing life she led. Prayers to her family and friends who knew her.
Tori J Warden
March 6, 2021
I only met your mom once, but she an amazing woman. So sorry for your loss.
Bill Davis
March 5, 2021
I can't believe she's passed. So sorry to hear of her passing. God Bless you
Thomas Anders
March 4, 2021
Missing you more and more everyday Mom But I know your soul is still wandering around us I will see you again one day, We have to find each other but what a wonderful day that will be. Forever love Mom. (even though I am not your biological daughter) You will always be my mom. Big Hugs for all your loved ones and you as well. Be watching for me.
Theresa Curry
March 3, 2021
I did not know this wonderful lady but I had to offer my condolences, may she rest in peace. Sending God's Blessings to her family and friends.
Linda Maroney
March 2, 2021
I want the family to know that I loved your mom just as if she was my biological mother. I am so glad that I had the times with her at church, just where we met years ago. Clenise and Rita please know that when I get to Heaven I will find her. Mom treated me as her daughter, There was so much love poured into her cards she sent me and the one's I sent her. .Mom was a unique woman and I am so sorry she's gone, I know she's in heaven with all her family and I know she's watching over us all. I'm proud to call her my mother. You are so missed by so many people and I hope she knows how much I love her. So very sorry for your loss.
Theresa Curry
March 2, 2021