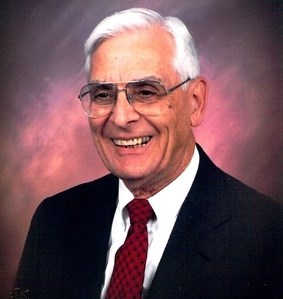 WOODLIEF, Milton C., 91, of Bon Air, died January 26, 2021, after a brief illness. He was born in Kittrell, N.C. to Thomas and Beulah Moore Woodlief. Milton was predeceased by his parents; brothers, Tom, Thurston, Clifton; and sister, Alice. He is survived by his wife of 57 years, Nancy B. Woodlief; his daughter, Janet W. Condrey (Ken); and son, Paul B. Woodlief (Trish McMahon). Milton served in the United States Coast Guard before attending North Carolina State College (University), graduating in 1957. He worked in sales and marketing for Dominion Energy for 35 years. Milton was an active member of the Virginia Economic Developers Association. He served as president from 1991 to 1992 and was made an Honorary Member in 1994. Additionally, he served a year as president of the Dominion Retirees and was a 60-year member of the Masonic Lodge. After his retirement from Dominion, Milton worked part-time for the City of Petersburg – Economic Development, retiring from a second career on his 83rd birthday. Milton was devoted to his family and church, Bon Air United Methodist. Family and friends considered him a true southern gentleman. He will be greatly missed by all who loved, knew or worked with him. A celebration of his life will be announced later. Memorial donations may be made to the United Methodist Family Services at UMFS, Attn Development Office, 3900 West Broad St., Richmond, Va. 23230 or to the Alzheimer's Association – Greater Richmond Chapter, 4600 Cox Rd. #130, Glen Allen, Va. 23060.
To plant trees in memory, please visit our Sympathy Store.
Published by Richmond Times-Dispatch on Feb. 21, 2021.
MEMORIAL EVENTS
No memorial events are currently scheduled.
To offer your sympathy during this difficult time, you can now have memorial trees planted in a National Forest in memory of your loved one.
GUEST BOOK
5 Entries
It is never easy to lose one´s father. My condolences to you and your family. Your good memories will be a blessing to you. Much love.
Aimee West
February 23, 2021
Nancy, I am so sorry to hear this. Milton was like a big brother to me. I first met him in '59 when I started with Vepco in Norfolk. We eventually transferred to Richmond and I went to work in Customer Relations. When we moved to 14th floor at OJRP Milton and I worked on the same floor. It was such a joy being reunited with my old friend, sharing old memories and lots of laughs! He was a dear friend and I have thought about him a lot over the years. May God comfort your heart. Love you, Nell Little
Nell P Little
February 22, 2021
Uncle Milton will be missed immensely. It was such an honour to have met uncle Milton during my stay in USA. My thoughts and prayers are with the family..my extended family. Sending lots of love and hugs to Aunt Nancy and Jan.
Madhavi Reddy
February 21, 2021
Milton was an incredible man, Christian, son, brother, husband, father, uncle, and citizen. I´ll miss him and all he epitomized and stood for. Sending our love to Aunt Nancy, Jan, & Paul.
Harrison & Elizabeth Smith
February 20, 2021
My sympathy goes out to your family!! Milton was a wonderful person...inside and out!! Fred and I loved him very much!
Kathleen Mears
February 20, 2021